The multi-layered archaeological site of Megiddo is famous for being the Armageddon of the New Testament's Revelations; a prophesized location for the apocalypse.

For historically minded visitors, Megiddo is one of Israel's key archaeological attractions. Throughout its long history, Megiddo served as an important settlement for both the Ancient Egyptians and Ancient Israelites.

A staggering 26 settlement levels have been excavated here, covering over 5,000 years of continuous occupation and dating settlement on this spot right back to the Neolithic era.

Before you begin touring the ruins, head to the Museum and Visitor Center.

Like many multi-layered ancient settlement sites, the surviving remnants can be confusing to decipher. The museum here does a good job of helping visitors navigate the vast history on display.

There's a large model of Ancient Megiddo to help you visualize the site, and a short audio-visual presentation that explains the history.

Some of the best surviving remnants of Ancient Megiddo are its fortifications.

A footpath leads to the entrance on the northern side of the site where, after passing a gate dated from the 15th century BC, you come to a gate from Solomon's era. The three chambers on either side of the entrance can be clearly distinguished.

Immediately south of the gates are extensive remains of buildings where a number of ivories from the 13th century BC were unearthed by archaeologists.

The path turns east here from where there is a beautiful panoramic view northward over the Jezreel Plain, to the Galilean hills around Nazareth.

Megiddo's Water Tunnel (which guaranteed the town's water supply) is the site's major tourist attraction. Take the path leading from Megiddo's Stables to find it.

The water tunnel was formerly attributed to the 13th or 11th century (in the time of the Canaanites or Philistines), but excavations have now firmly dated it to the Israelite period in the time of Ahab (9th century BC).

The source of Megiddo's water is a spring in a cave outside the town. In the time of Solomon, a two-meter-wide shaft was cut through the walls to give access to the spring on the southwest slope of the site.

Ahab resolved to construct a conduit at Megiddo, which would run from inside the town to the spring, and in the event of a siege, would not be accessible to the enemy.

This staggering structure is one of antiquity's great engineering achievements. Many of Megiddo's visitors come to the site specifically just to walk down through the tunnel (which has been fitted out with a modern staircase and walkway) to see it for themselves.

Although it can be hard to imagine, the temple complex was once a mighty and monumental piece of architecture (see the reconstruction in Megiddo Museum).

The Eastern Temple consists of a vestibule, the main chamber, and the holy of holies.

The rear wall of the holy of holies backs on to the temple with the circular altar. Built against the inner wall is a square altar approached by steps on the side.

Adjoining this temple on the west are other cult buildings, presumed to be a Double Temple for a divine couple. On the valley side are remains of walls from an older temple dating from the Chalcolithic period (4th millennium BC).

The major point of interest in the southern section of the site is a large circular grain silo dating from the reign of King Jeroboam II (8th century BC). Set into the inner walls are two flights of stairs.

Beyond the grain silo are two large complexes built by Ahab on the site of Solomon's palace. To the right is a courtyard with the famous stables in which the stalls, feeding troughs, and pillars with holes bored into them for tethering horses can still be seen.

The stables could accommodate 450 horses, together with war chariots and their charioteers.

Tips and Tactics: How to Make the Most of Your Visit to Megiddo

Excavation of the tell of Megiddo began in 1903-05 with the work of the German Palestine Society, when Schumacher cut the deep, wide trench on the east side that bears his name.

Between 1925 and 1939, the site was systematically investigated by the Chicago Oriental Institute, and in 1960, Yigael Yadin began the excavations, which established the chronology of the site.

This work showed that after a period of occupation in the Neolithic era there was a Canaanite settlement here in the 4th millennium BC, which continued in existence until the Israelite occupation. From this period there is a Chalcolithic shrine and another one nearby with a large circular altar.

After a battle in 1479 BC, in which Pharaoh Tuthmosis III gained control of the pass during his advance to the Euphrates, the town was under Egyptian influence. In the Tell el-Amarna archives (14th century BC), letters were found from the Egyptian governor asking for military reinforcements against the Habiru (which may be referring to the Hebrews).

In the 13th century BC, Joshua, after his triumph over the king of Hazor, also defeated the king of Megiddo (Joshua 12,21), but the Israelites held the town only for a short time, for in the 12th century, the Philistines, thrusting inland from the coast, conquered Megiddo and the whole of the Jezreel plain as far as Beth-shean.

A new phase began around 1,000 BC when David defeated the Philistines.

In the 10th century, Solomon made Megiddo the chief town of the fifth administrative region of Israel, extending as far as Beth-shean, with Baana son of Ahilud as its governor (1 Kings 4,12).

To the east of the main gate, Yigael Yadin's excavations brought to light a Northern Palace dating from this period, probably the royal residence, and one of the casemate walls characteristic of Solomon's time, like those at Hazor and Gezer, as well as the formidable North Gate.

On the south side of the site were the palace of the governor, Baana, and an administrative building. "This was not a mere fortress but a metropolis with imposing buildings designed for ceremonial purposes" (Yadin).

The Solomonic city was destroyed in 923 BC by Pharaoh Sheshonq (the Shishak of the Old Testament) and had to be rebuilt by King Ahab in the 9th century.

On the site of the North and South Palaces, stables were built for 450 horses (long known, erroneously, as "Solomon's Stables"). Ahab, who no doubt attached particular importance to Megiddo because of its situation on the road to Phoenicia, his wife's home country, renovated the Solomonic gate, built a strong new wall round the town, and dug a large tunnel to ensure its water supply.

Thereafter, Megiddo enjoyed a period of prosperity, which ended in 733 BC with its conquest by the Assyrians in the reign of Tiglath-pileser III.

In 609 BC, King Josiah of Judah was killed at Megiddo in a battle with Pharaoh Necho.

After the Persian conquest in 538 BC, the town was abandoned, but in Roman times, a camp occupied by the sixth Legion was built two kilometers south of the tell. This gave its name to the Arab village of Lajun, now the kibbutz of Megiddo.

In more recent times, Napoleon (in 1799) and General Allenby (in 1917) won victories over Turkish armies at Megiddo, and again in 1948 the Israelis defeated Arab forces here. 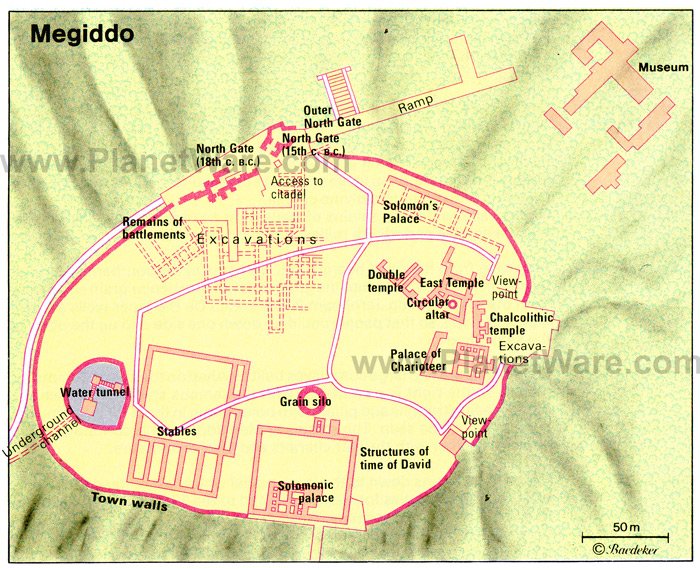