Barcelona is much more than a Catalonian hub of delicious food, unique gardens, and funky architecture. This seaside wonderland is also a lovely place to unwind while soaking up the Mediterranean sun. Deep azure waters dazzle beachgoers as they sink their toes into golden sand, particularly during the busy summer.

Prior to the 90s, much of Barcelona's coast was an industrial wasteland. Thanks to the city's role as host of the 1992 Summer Olympic Games, the country devoted time (and a whole lotta money) to reinvigorating the shore. We're talking sand imported from Egypt kind of upgrades.

Whether beachgoers hope to bask under the Mediterranean rays, play a game of volleyball, or enjoy fresh tapas on the sand, there's no end of fun to be had on Barcelona's best beaches.

Beautiful Bogatell is one of the best beaches in Spain and a designated Blue Flag Beach. Set between Mar Bella and Nova Icària, this pretty beach attracts an older crowd – the average age of beachgoers is 38. Locals flock here for its wide, tranquil shoreline, ping-pong tables, and volleyball courts.

Coarse, clean sand blankets the 600-meter-long stretch, which was developed to help reinvigorate Barcelona's shoreline prior to the 1992 Olympic Games. Play a game of pickup volleyball, take a windsurfing or kitesurfing lesson, or kayak in the open sea. There are a ton of fun things to do on Bogatell.

Lifeguards dot the beach, and restrooms and showers are available, as are kiosks selling food and ice cream. If those don't satisfy your cravings, head to one of the nearby restaurants. Insider's tip: the farther you walk from Frank Gehry's giant Golden Fish statue (which stands near Barceloneta Beach), the more open sand you'll find.

Barceloneta is the Miami Beach of Spain: crowded, boisterous, and endlessly entertaining. The most popular beach in Barcelona, this is where people go to see and be seen. Fans of people-watching won't be disappointed, but those searching for a quiet place to unwind will want to look elsewhere.

Named after the ancient fisherman's neighborhood that links to its shore, this exciting beach is close to some of the city's best food, including the freshest tapas. If you'd rather not don a shirt and shoes, seaside huts offer delectable paella, as well as chair and umbrella rentals.

Lifeguards are on duty, and amenities include showers, restrooms, a playground, and plenty of opportunities to participate in water sports. Insider's tip: Bring your own sunblock and towel as the upcharge in this area is enormous.

When it comes time to rinse the sand from your swimsuit, treat yourself to a stay at the luxurious Hotel Arts Barcelona. One of the best beach resorts in Spain, this Ritz-Carlton property features unbeatable views and a phenomenally relaxing spa.

Another notable Barcelona beach, Nova Icària is a Blue Flag beach popular with tourists and locals alike. A family-friendly favorite, this well-placed beach stretches 415 meters and lies about halfway along the city's shoreline.

In addition to being one of the quietest beaches in Barcelona, Nova Icària is also the calmest, making it a perfect place for little ones to swim in the Med. Despite its more tranquil appeal, kids won't get bored here.

With ping pong, a playground, and volleyball courts on offer, there's always something to keep kids' attention. Other amenities include lifeguards, restrooms, showers, and water fountains. Plus, the beach is located right near Port Olímpic, which boasts even more water-based activities.

If you're hoping for something more substantial (and delicious) than a concession meal, head to the Passeig Marítim de la Barceloneta, where you'll find a bevy of delicious restaurants.

Mar Bella, a long (about 512 meters) sandy stretch of land north of town center, welcomes visitors looking to bask in the sun without the masses and bothersome vendors found on Barceloneta and Sant Sebastià. Popular activities include volleyball, kayaking, skateboarding, rollerblading on the promenade, swimming, windsurfing, and paddleboarding.

Revamped as part of the Olympic Games beautification project, this lovely beach has also been awarded the Blue Flag, meaning it's both clean and environmentally conscious. A beach of contrasts, one section is clothing optional (and separated by a man-made hill), while the other end boasts a children's playground.

The crowd here is young and diverse and includes many locals from the nearby neighborhood, Sant Martí. Amenities include showers, restrooms, umbrella rentals, concessions, and lockers. Lifeguards are also on duty.

This bustling strand was one of the first to boast amenities like restrooms, showers, and on-duty lifeguards. It was also the first beach in Barcelona to allow men and women to swim together.

Surfers, sailors, paddleboarders, and swimmers dot the sea, while the sand is packed with sun worshippers from May through August. It's within easy walking distance of the town center, making it easy to find sustenance. That said, there are plenty of food vendors on hand for those who'd rather stay put.

Insider's tip: If you or your travel companions have mobility issues, this is the beach for you. There's a dedicated area complete with amphibious chairs. It's staffed by volunteers to help those with disabilities enjoy a dip in the sea.

Nova Mar Bella hugs the coast north of Mar Bella. It, too, has been granted the esteemed Blue Flag Beach award for its pristine sand and water conditions. This tranquil strand measures about 420 meters in length and stretches from Bac de Roda breakwater to the Selva de Mar breakwater.

Nova Mar Bella has been dubbed one of the most peaceful beches in Barcelona, and it's frequented by locals looking for a quieter day spent frolicking on the sand. Visitors will find all the amenities they need, including lifeguards, concession stands, restrooms, showers, and sun lounge and beach umbrella rentals.

This is another product of the 1992 Olympic Games rejuvenation project, and beachgoers won't be disappointed by a visit to this fun and expansive slice of serenity.

Once home to nearly 15,000 people living in a decrepit shantytown, Somorrostro is now one of the prettiest beaches in Barcelona. In stark contrast to its previous existence, this high-end beach is positioned close to some of the city's most luxurious shops and restaurants.

Located near Gehry's Golden Fish statue, Somorrostro spans 520 meters between the Gas breakwater and Moll de Marina Pier. Techincally a part of Barceloneta, this section of the beach was renamed to pay homage to the historic settlement.

At the strand's center lies the Centre de la Platja, an educational facility that hosts multiple fun activities including workshops, games for kids and grownups alike, environmental talks, and storytelling.

The youngest of Barcelona's beaches, Llevant was created in 2006 in the Sant Martí neighborhood. At 375 meters, this Nova Mar Bella neighbor isn't the largest in the area, but it is one of the quietest and most open.

You won't find a ton of waterfront shacks or restaurants at this newly minted wonder, but it's got the basics that make it easy to stay all day. We're talking restrooms and showers, as well as lifeguards. There's also a volleyball court on-site and beach chair and umbrella rentals.

A high wall separates Llevant from the massive amount of parking on the other side – a nice change from the other local beaches where leaving your car is a considerable challenge.

Dog owners flock here for the 1,250-square-meter dog beach that's fenced off from the rest of the strand. It features a doggie drinking trough, pet showers, and "urban-dog urinals." Over 60 pups can hang out here from 10:30am to 9pm during the summer.

Sant Miguel lies between the larger and more popular beaches of Sant Sebastià and Barceloneta. Essentially an extension of these busy beaches, Sant Miguel features sunburned tourists flittering around its fine, sandy shore and cooling off in the clear, deep blue waves of the Mediterranean Sea.

Measuring about 420 meters long, this Blue Flag beach (one of the oldest in Barcelona) is both pristine and centrally located. Its close proximity to the bustling Plaça del Mar makes it easy for visitors to escape the sand for a bit of shade and sustenance.

This beach was named after the 1755 church, Sant Miguel de Port, and features every amenity you would expect in a stellar beach, including restaurants, restrooms, lifeguards, showers, and equipment rentals.

Five kilometers of sand run along the shore of Castelldefels, a remarkable beach located a 20-minute train ride south of Barcelona. When you arrive, you'll be greeted by a winding crescent of golden sand peppered with beach umbrellas and a rainbow of kitesurfers riding the bright cerulean waves.

Deemed by locals to be one of Barcelona's best beaches (despite the fact that it's not located within the city limits), this natural beauty compels even the most high-strung of visitors to relax. Sailing and windsurfing schools offer lessons nearby, while multiple beach shacks and restaurants will tempt your palate.

The promenade offers a non-sandy spot for walking and biking, as well as an unimpeded view of nearby Parc Natural del Garraf.

Another Catalonian gem, Ocata lies about 12 miles north of Barcelona and offers the type of idyllic beach experience that can't be had in a big city. Even during the summer, there's no need to stake your claim on a towel-worthy spot.

Set in the small town of El Masnou, Ocata's fine golden sand is remarkably flat, making it an ideal spot to play rugby, soccer, or volleyball. It's not uncommon to see anglers attempting to reel in a big one off this shore.

Despite being a half-hour train ride from Barcelona, Ocata isn't devoid of access to fabulous food. It's perfectly positioned near waterfront restaurants, with plenty of tapas (and a welcome shade break) to be had, especially if you head a bit further into town.

Sometimes one beach just isn't enough. That's when you head to Sitges. A vibrant resort town 35 kilometers southwest of Barcelona, this vibrant locale is home to 17 sandy beaches. With so many great options to choose from, Sitges is a haven for beach lovers.

Whether you're looking for an LGBTQ-friendly, clothing-optional, or family-friendly beach, you'll find it, and so much more, on the soft shores of Sitges. Want to get in on the action? Head to one of the beaches closest to the city center. Platja de la Ribera is particularly popular.

Want to enjoy a bit of peace? Travel a bit farther out, and you'll find wide expanses of sand with few lounge chairs to mar your view of the horizon. Platja de Barra is set in a cove-like environment and receives fewer crowds.

Traveling with kids? Platja de la Fragata is the beach for you. It boasts volleyball nets and a bike rental in addition to clean sand and calm waves.

More to Discover in Barcelona: Once you've had your fill of the beaches, you'll find plenty of things to do in Barcelona, by day and night. See the architectural creations of Antoni Gaudi, wander along La Rambla, or head up to the hilltop neighborhood of Montjuic. If you haven't yet figured out your accommodation, see our guide on Where to Stay in Barcelona: Best Areas & Hotels. 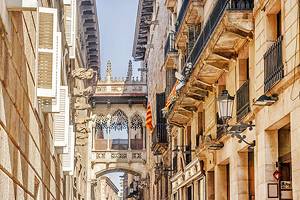 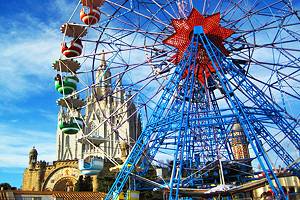 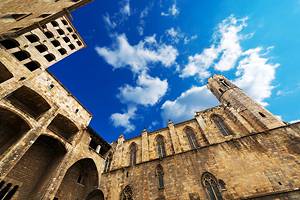 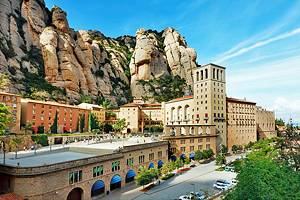 17 Top-Rated Attractions & Things to Do in Zaragoza