Written by Barbara Radcliffe Rogers
Updated Mar 9, 2021
We may earn a commission from affiliate links ()

One of Tuscany's medieval hilltop towns, Volterra sees fewer tourists than others, despite its many attractions. So you can expect to share its winding stone streets with locals and explore its ancient sites without crowds. Before the third century BC, when it became a Roman municipium, Volterra was a member of the Etruscan League of twelve cities, and it was already known for its alabaster, which was worked by master craftsmen and traded throughout the peninsula.

Volterra's historic center is still marked by medieval tower houses from the 12th and 13th centuries - look north of the cathedral for Casa-torre Buonparenti, Torre Martinoli, Casa Nannetti e Miranceli, and Torre Buonaguidi. In Via Ricciarelli, you'll find more at numbers 24 and 34 to 36; note the small windows for children below the main windows.

Volterra has gained recent tourist attention as the home of the Volturi in Stephenie Meyer's Twilight series, although there are no particular places to visit that are associated with the stories, and you're not likely to meet any vampires here. The "Volterra" scenes from the film New Moon were actually shot in Montepulciano.

Discover the best places to go in this charming town with our list of the top attractions and things to do in Volterra.

North of the town walls, and accessed via Porta San Francesco, is the large Vallebuona archaeological area, where excavations since 1951 have revealed a Roman theater dating from the first century AD.

It is one of Italy's best preserved, with 19 tiers of seating built into the natural slope, as well as the orchestra pit, faced in marble. The theater seated between 1,800 and 2,000 spectators, and the position in the side of a natural bowl enhanced the acoustics.

Part of the stage - the pulpitum and two stories of structure and marble columns of the frons scenae - remain standing, as do portions of a semi-circular arched passageway that gave access to the cavea, the seating area. The seating area is in two colors of stone, alternating the white limestone seats with dark lava stone for the corridors.

There are also remains of thermal baths that were added after the theater was abandoned in the third century AD.

From at least the fourth century BC, Volterra was a major Etruscan settlement, considerably larger than it is now, and the entire area is dotted with archaeological excavations. A remarkable collection of these artifacts are displayed in this excellent museum, along with an equally outstanding collection of art from the prehistoric and Roman periods.

The Etruscan section of the museum gives an excellent view of the life and culture of this people about whom so little is known. It contains more than 600 cinerary urns of tufa, alabaster, or terra-cotta, mostly dating from the fourth to first centuries BC.

Particularly interesting are two urns with reliefs showing the Siege of Thebes, one picturing an arched gateway much like Volterra's Arco Etrusco. Other items include a mixing vessel from Attica, funerary stelae, jewelry, and coins. Owned by the city since 1761, this is one of Europe's oldest public museums.

Behind the Palazzo del Pópolo is the Duomo Santa Maria Assunta, consecrated in 1120 and enlarged in Pisan style in 1254. The campanile, which along with the dome of the baptistery, provides focal points on Volterra's distinctive skyline, was rebuilt and stabilized in 1493 after its collapse. The church interior was remodeled in the 16th century, so it is predominantly Renaissance in style.

Inside the entrance wall, the beautiful eight-panel altarpiece is from the Romanesque altar, and in the first chapel in the right transept is the Reliquary of Saint Ottaviano by Raffaele Cioli. The impressive pulpit was made in the 17th century from fragments of varying origin, including 12th-century reliefs of Old and New Testament scenes.

In 1926, excavations began to uncover the remains of an ancient Etruscan acropolis with the foundations of buildings dating from the second century BC. Discovered and excavated here are a cistern, pool, remains of a plumbing system, and two rectangular temple-like buildings, one dating from the 2nd century BC and the other from the 3rd century AD, with a podium and colonnade.

The archaeological site is especially interesting for its layering of Etruscan, Roman, and medieval buildings. The excavations are in the Parco Enrico Fiumi, named for the archaeologist who excavated the Roman Theater. The park is near the Medici fortress.

In the Piazza dei Priori, the central square of the medieval town, the Palazzo dei Priori is now the Town Hall. It's the oldest in Tuscany, built between 1208 and 1254. The coats of arms on its austere façade show that it was, in succession, the official residence of the podestà (chief magistrate) and later of the Florentine priori and commissari.

At either end of the façade are columns with the heraldic lion of Florence. The Council Chamber on the main floor is decorated with frescoes, most in the "Historical" style of the 19th century. Opposite the Palazzo dei Priori is the 13th-century Palazzo Pretorio, which until 1511 was the seat of the Capitano del Pópolo, a local official acting on behalf of the people to balance the power of noble families.

It incorporated a number of earlier buildings and is dominated by the battlemented Torre del Podestà. On top of the tower is a figure popularly known as Porcellino - Piglet.

The octagonal baptistery, which stands separate from the cathedral, is from the 13th century and much altered since, but it retains a Romanesque doorway with figural decoration. Of its eight sides, only the façade is faced in green and white marble stripes. The interior is plain and has an excellent 1502 font by Andrea Sansovino with relief carving.

In the cloister adjacent to the duomo, the Diocesan Museum of Sacred Art displays the treasury and liturgical objects, including a glazed terra-cotta bust of St. Linus by Andrea della Robbia, a 15th-century silver Reliquary of Saint Ottaviano by Antonio del Pollaiuolo, a wooden tabernacle decorated with miniatures from the Umbrian school, and a 16th-century gilt-bronze Crucifix by Giambologna.

This palace was - and still is - the residence of the Viti family, descendants of Giuseppe Viti, an important figure in the early 19th-century history of Volterra. He was a leader of the unique practice known locally as "the Alabaster Travelers' Movement," which brought the city its prosperity.

The palace's 12 public rooms are filled with priceless collections of alabaster art, as well as furnishings and art from Italy, Europe, and Asia dating from as early as the 15th century. Highlights include furniture with stone and wood inlay, alabaster floors, and Chinese ivories brought back by members of the Viti family from their journeys around the world selling alabaster. A painting in the dining room shows Giuseppe Viti crossing the Andes with cases of alabaster.

In the ballroom are two alabaster candelabra made in the Viti workshops for Maximilian of Habsburg, the emperor of Mexico, and unfinished at the time of his death. In the dining room is an outstanding collection of 18th- and 19th-century Chinese miniatures, and the bed curtains and tapestry in the King's Room were there in 1861, when King Victor Emmanuel II stayed here. He was not the only royal visitor, and the palace has been used by director Luchino Visconti as a film location.

The 13th-century church of San Francesco was built for Franciscan friars, and has some notable religious paintings, but what should put it on any visitor's list of things to do in Volterra is its Capella della Croce di Giorno (Chapel of the Holy Cross).

Built for a confraternity associated with the church, the chapel is lined with a fresco cycle by Cenni di Francesco and Jacopo da Firenze, both of Florence. Painted in the early 1400s, the frescoes depict scenes from the legend of the True Cross and were inspired by the frescoes by Agnolo Gaddi in Florence's Santa Croce church. The vivid colors, detailed depictions of dress and surrounding landscapes, and the intricate decorative elements of the borders make these frescoes especially compelling.

Follow Via Porta all'Arco from the center of Volterra to find the Arco Etrusco, a gate in the city's ancient circuit of walls. Although the arch itself was rebuilt in Roman times, and the masonry on either side of the gate is medieval, the dressed stones flanking the gateway and the three weathered heads on the arch date from the fourth or third centuries BC.

A similar gateway is depicted on an Etruscan work from the first century BC in the Museo Etrusco Guarnacci. A commemorative tablet records that during the Second World War, the people of Volterra prevented the gate from being blown up by German troops.

Etruscan walls, now picturesquely overgrown with ivy, holm-oaks, and stunted cypresses, are still evident around Volterra, where they trace a very irregular outline much larger than that of the medieval town. In some places, the walls rise as high as 11 meters.

The Minucci-Solaini Palazzo, which houses the museum and gallery, is itself among the top places to see in Volterra. An outstanding example of Renaissance architecture of the late 15th century, the palace is attributed to Antonio San Gallo the Elder. The collections housed here include a number of notable artworks, but the highlight is Rosso Fiorentino's Deposition from the Cross. Completed in 1521, this is considered to be the Renaissance painter's masterpiece.

Other significant works in the collections of the museum and gallery include a Pietà by Francesco Neri of Volterra; wooden sculptures by Francesco di Valdambrino; two major paintings by Luca Signorelli from Cortona; and an altar piece, Christ in Glory, by Domenico Ghirlandaio. In addition to the paintings and sculptures are medieval ceramics and the Medici coin collection.

11. Watch Craftsmen at the Alabaster Ecomuseum

Alabaster has been important to Volterra since the eighth century BC, a story that is told in this museum and workshop. Exhibits show how the stone is (and was) quarried, how it has been worked, and how traveling artisans spread the craft to other places and made Volterra a wealthy city.

The museum includes a long-established family alabaster workshop and displays of the craft through the ages, including Etruscan pieces and exquisitely delicate works from the 18th century, when the industry was at its peak. As you tour Volterra, you'll see many alabaster workshops, especially on Via Porta all'Arco on your way to the Etruscan Arch.

Commanding the hilltop above the city, the huge Medici Fortress is a landmark visible from some distance. The newest section was built in 1474, two years after Florence conquered Volterra. It was built as much to control the population below, whom the Medici feared might revolt, as it was to protect the city from invaders.

Lorenzo the Magnificent first modified the old Rocca, which had been built in the mid-1300s, later connecting it to the new fortress by a curtain wall. Now a prison, the interior of the fortress is not open to visitors.

Where to Stay in Volterra for Sightseeing

Several good choices of hotels are near the major attractions in Volterra. Three of these highly recommended hotels are within the walls of the old town, and one is a short distance outside.

Tips and Tours: How to Make the Most of Your Visit to Volterra 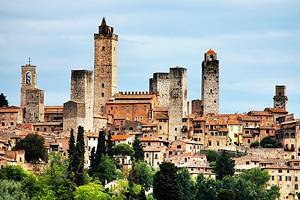 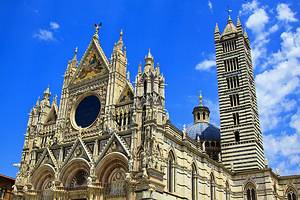 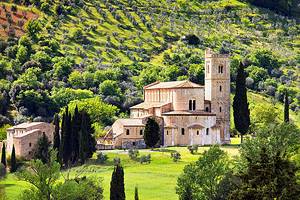 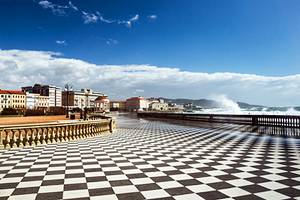 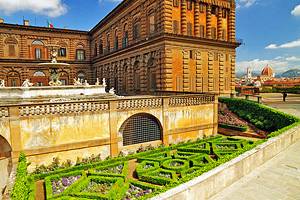 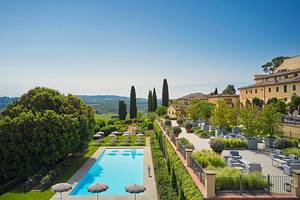 From Florence to Siena: 4 Best Ways to Get There
Recent Articles