Spain is one of the best destinations in the world for photographers, filled with incredible places to capture images. The country offers a wide range of natural and cultural landscapes, and it's connected with a strong infrastructure, so you can easily get from one place to another.

Architectural photographers will enjoy getting up close to the fantastic work of Antonio Gaudi in Barcelona, or finding unique perspectives of the Neoclassical masterpieces lining the streets of Madrid. If you like taking pictures of artwork, the country's museums are home to some of the greatest works of art ever created.

If you're looking for landscape and natural subjects, Spain's islands, like the Canaries or Balearics, each offer a seemingly endless array of environments and settings to photograph. Nature and wildlife photographers will appreciate Spain's many national parks and vast areas of unspoiled natural landscapes.

All the Spanish Canary Islands, located off the coast of Africa, are good destinations for those wanting to photograph landscapes and nature subjects. The volcanic origin of the islands means you have some other-worldly landscapes, along with mountains, beautiful beaches, and coastlines.

La Palma is an island that offers mountains, forests, and lava fields and has less tourists, yet is still easily accessible by direct flight.

Madrid's historic, 17th-century city square remains a visually fascinating place to visit. It's a great place to photograph people, with the striking architectural background of the iconic building facades. The square always has something happening seasonally, some kind of market, fair, or other event, which usually adds to the photographic appeal.

Accommodation: Where to Stay in Madrid: Best Areas & Hotels

The world's most famous modern church, this basilica is the life's work and legacy of the great Spanish architect Antonio Gaudi. The site, inside and out, is a great place to photograph. Be sure to do one of the tours that includes a ticket to climb one of the towers - you can get great photos of the city from the top.

As a country that loves its food, Spain offers a good view of its culture at its markets. The massive La Boqueria market in Barcelona is a cathedral to food. Row after row of every kind of fruit, vegetable, meat, spice, and more are all waiting for your camera.

Another piece of architectural genius is the Casa Mila apartment building in Barcelona. A Gaudi creation, it's like nothing else in the world. The exterior of the building is a great subject for photos, but pay attention to the details. Railings, stairs, window frames, everything is unique and made specifically for the building. The interior, which is open for visits, also presents a wide array of photo subjects.

When you think of Madrid parks, you might think first of the city's large El Retiro park. While that is a great place to photograph (especially the area around the large lake), head to the more compact Sabatini Gardens, formerly the private Royal Palace gardens. The gardens are open until 9pm in the summer, and the late-day light makes for some beautiful images. The gardens are directly behind the Palacio Real in the heart of the city.

Located in Seville, the capital city of Spain's Andalusian region, the Alcazar of Seville is the city's castle-fortress and one of the top attractions. It's a great place to photograph, as it's filled with some incredible Islamic architecture from the Moorish period.

The beauty and energy of this traditional Spanish dance method (and its traditional costumes) can be explored and photographed in Seville. For the best action shots, head to the Triana neighborhood and Calle Betis. There are performance venues where you can photograph dancers and even find people dancing in the street on weekend evenings.

The Alhambra, an incredible 14th-century Moorish palace and fortress, is in the Andalusian city of Granada. The Islamic architecture and design (considered some of the best examples in the world from that time period) make it an amazing place to photograph.

Accommodation: Where to Stay in Granada: Best Areas & Hotels

Teide is a large national park on Tenerife, the largest of Spain's Canary Islands. Inside the park, you will find the island's three extinct volcanoes, each of which can be explored. There are also vast forests and other-worldly lava fields for some great landscape and nature photography.

This Spanish island is a short ferry ride from its neighbor Ibiza and offers a much quieter experience. Great places to photograph include the bright white-sand beach and clear, aqua-blue water of Es Pujols and the El Faro de la Mola lighthouse, perched high above the sea on a cliff.

This compact district preserves the narrow cobblestone streets and buildings of the medieval walled city of Granada. The architecture is also preserved and restored from the period, and the area is one of the earliest areas of Muslim culture in the region. There are many historic sites and museums within the district.

Ordesa y Monte Perdido is a vast national park that includes mountains, forests, and glacial valleys. It's one of the best places in Spain for outdoor nature and wildlife photography. The park is located in the Aragon region of the Pyrenees, on the border with France.

Quieter and less developed than its neighbors Ibiza and Mallorca, this Spanish island is all about beaches. Big beaches, small beaches, rocky beaches, sandy beaches - they're all here. Some of the best places to photograph are the many secluded coves, with rocky cliffs and crystal-clear turquoise water.

This incredible natural wonder is visible on the beach at low tide. The ocean withdraws to reveal 35-meter-tall rock formations on the beach, giant towers and arches that remind one of a cathedral. The area is near the town of Ribadeo on the northwest Atlantic coast of Spain.

In Madrid, you can take photos of an ancient Egyptian temple. The Temple of Debod dates back to the 2nd century BCE and was brought to Spain in the late 1960s. It's located in the Cuartel de la Montana park.

Spain's royal palace is a massive complex (the largest in Europe) mainly done in the Baroque style. It's a great place to photograph whether you're looking to capture the structure or the details, like the statues and carvings. Inside, the palace is filled with art masterpieces and ornate architectural details.

This deep limestone gorge near Valencia is over 25 miles (40 kilometers) long, and is considered Spain's Grand Canyon. Unlike the American Grand Canyon, this one has a village built into the canyon walls. The dramatic natural landscape and geology make it a great place for photos.

19. City of Arts and Sciences, Valencia

The spaceship-like City of Arts and Sciences is a massive museum and entertainment complex in Valencia. The shiny silver building is a great subject for photos. Inside, Spain's largest aquarium also presents a dazzling array of photo subjects. 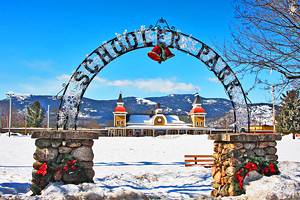 15 Best Things to Do in North Conway, NH
BE INSPIRED