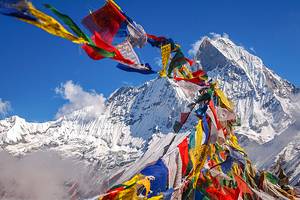 After centuries of seclusion it was the middle of the 20th century before the South Asian Kingdom of Nepal opened its borders to the outside world; by the 1970s and 1980s it had become popular with tourists seeking somewhere different. Since then the rather dubious benefits of modern Western life have been introduced to the inhabitants of the Nepalese valleys on the southern side of the Central Himalayas, leading to marked changes and increasing social problems. About a quarter of Nepal's export income is derived from tourism, with the emphasis on hill-walking, mountain tours and "white water" canoeing.

Originally the name Nepal (pronounced "Neppawl") referred solely to the Kathmandu Valley region. Today it is used to refer to the whole kingdom lying along the southern slopes of the Great Himalayan Range.
The geography of Nepal is marked by considerable differences in altitude - from the northern edge of the Upper Gangetic Plain (min. 86 m (282 ft)) up to the world's highest peak in the Himalayas (8848 m (29,039 ft)). Although the country measures at most only 230 km (140 mi.) from north to south, the maximum difference in altitude is 8762 m (28,757 ft). Almost two-thirds of this predominantly mountainous land lies at more than 1000 m (3300 ft) above sea-level, with at least a quarter above 3000 m (9900 ft).
Nepal's climate in the course of the year is largely determined by the monsoon, which results in extremely high levels of rainfall between June and September, while the remaining months are comparatively dry. 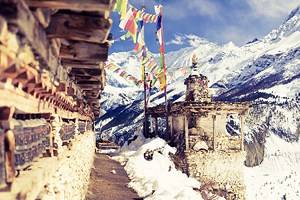 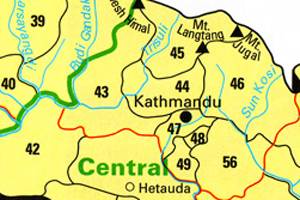 22 Most Beautiful Islands in the World
BE INSPIRED!
MORE PICTURES OF NEPAL