Kerak was one of the largest castles built by the Crusaders in the Middle East. Its commanding position, with its fortifications straddling across the hilltop, and strategic location on the main route from Jerusalem, assured Kerak's prominence in the Crusader's line of defense.

Jordan has three major Crusader castles (the other two are at Ajloun and Showbak), but Kerak is the best preserved, and its extensive fortifications are still an impressive sight.

Today, it's the major tourist attraction along the King's Highway between Madaba and Petra.

Kerak's history dates back to at least to the Chalcolithic era. Straddling a hill upon an ancient trade route that is followed today by the King's Highway road, has always made Kerak a prominent stronghold location for whoever wanted to gain and maintain control over the area.

There has been some kind of defensive fortification here since at least the Iron Age, when it was part of the Kingdom of Moab.

The castle visitors see today, though, dates back to the 12th century and was built by the Crusaders as part of their line of defense, with castles built in strategic positions from Aqaba in the south up to modern-day Turkey in the north.

From Kerak, the Crusaders ran their administrative district of Oultre Jourdain. The castle's most infamous occupant during this period was Reynald of Chatillon who installed himself as Kerak's ruler in 1176 and became known for his gruesome practice of deposing of prisoners by throwing them over the castle walls.

Completely ignoring the truce in place between the Crusader king of Jerusalem and Saladin that had brought peace to the region, he used his strategic position to raid passing Arab caravans to build up his personal wealth. This eventually led to his downfall when Saladin laid siege to the castle.

The castle survived the siege but later, during the Battle of Hattin in 1187, the victorious Saladin captured and killed Reynald. Afterwards, he returned to Kerak to again lay siege to the castle.

The siege lasted a year. The castle's occupants resorted to eating dogs and horses before Reynald's widow finally surrendered the castle to Saladin in 1188.

After crossing the bridge over the dry moat, you enter Kerak through an Ottoman-era gate addition to arrive in the castle's Upper Court. There are panoramic views across the rolling hills of the surrounding countryside from various points along the battlements here.

Much of this area of the castle, near the entrance, dates from its original Crusader origins. The northeast corner of the castle complex is home to a barrel-vaulted gallery, which would have functioned as stables.

From the gallery, you can access a series of cells that served as storehouses, a kitchen, and barrack accommodation for soldiers. The kitchen still has the grinding stones on display and a massive, easily distinguished oven area.

In the southern section of the Upper Court, you'll find a Crusader church and various building additions dating from the later Mamluk era.

From the walls near the Crusader church, you get a great view of the castle's glacis (the vast, artificial slope that stretches down into the valley below, built to hinder attack).

The Mamluk Sultan Baibars began plenty of modification work on the castle, which was continued by later rulers. Today, you can see the remains of a Mamluk Palace and the defensive keep built to strengthen Kerak's defenses to guard against attacks from the south.

The keep's walls are over six meters thick. Note the slit-shaped windows set into the walls for shooting arrows.

From the keep, stairs lead to the Mamluk Palace, where there are various barrel-vaulted chambers and a mosque. The place is a late addition to the castle, built in the early 14th century.

Head back to the Crusader church from here, to access the underground dungeon with its barrel-vaulted galleries leading to prison cells.

Most of the castle's above-ground Lower Court fortification architecture that you can see today dates from the Mamluk period, built atop the Crusader foundations.

The west gate and bastion in the southern section of wall were important defensive features for the castle.

There is a small museum in a vaulted chamber here.

Beneath the court are two long vaulted chambers that probably were originally used as barracks accommodation for the soldiers stationed here.

Getting to Kerak Castle

If you're driving, Kerak is an excellent stop along the very scenic King's Highway route between Petra and Madaba.

The town of Kerak, flowing down the hillside below the castle, is a busy market town. There is good signage to the castle if you're driving, but note that traffic through town can be horrendous. Come early if you can.

If you're using public transport, there are direct buses from Amman (using the quicker Desert Highway) and minibus services from Ma'an (for connection from Petra or Aqaba).

Unfortunately there is no regular public transport along the King's Highway. Taxi drivers in Petra and Madaba are happy to be hired at a negotiated flat-rate to provide transport along this scenic route, with stops at Kerak and other tourist attractions along the way. 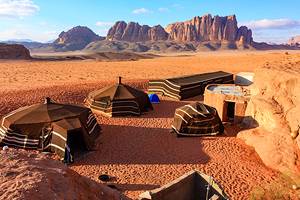 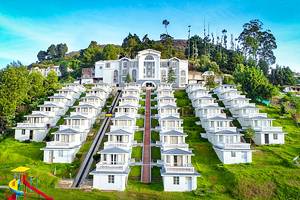