10 Top-Rated Things to Do in Tacoma, WA

Tacoma is a vibrant city on the shoreline of Puget Sound, approximately a 30-mile drive south of Seattle. It's home to over 200,000 residents, and boasts a colorful waterfront district lined with restaurants and attractions. Perhaps the most prominent of these tourist attractions are the museums in the noteworthy Tacoma Museum District.

From classic cars to the long natural history of the state, Tacoma's museums shine a spotlight on the Puget Sound region and beyond. One museum not to miss is the Museum of Glass. This inspired facility showcases glassworks from around the world. It also includes a special exhibit dedicated to the Tacoma-native Dale Chihuly - arguably the most prominent glass artist to practice the art form.

And Tacoma's appeal goes beyond the waterfront and museums. The city is also a jumping-off point for quintessential Washington adventures. One of the first destinations to explore is Point Defiance Park within city limits. This 760-acre park has more than 130 years of history.

Enjoy your next Pacific Northwest vacation with our list of the top things to do in Tacoma.

Point Defiance is Tacoma's crown-jewel natural space, on a peninsula jutting into Puget Sound on the far north end of the city. This 760-acre public space is comparable to Seattle's Discovery Park or Washington Park in Portland. Several attractions, including the Point Defiance Zoo & Aquarium, are within the park, all connected by a scenic network of hiking and biking trails.

Plan to spend the whole day at Point Defiance Park. Alongside the zoo and aquarium, the park is also home to the Fort Nisqually Living History Museum. Designers constructed this replica fort to resemble one of the first settlements in Puget Sound, dating back to 1883. The original settlement was not far away in DuPont, Washington.

One of the main attractions of the park is its natural landscape and many opportunities to explore. For suntanning, head to Owens Beach for plenty of space to sprawl out next to the water. Hikers often head to the Five Mile Drive and Trails system encompassing much of the peninsula. This set of scenic drives and hikes invites a world yet untouched by the modern sprawl nearby.

The Chihuly Bridge of Glass extends from the Museum of Glass over Interstate 705. It connects to the Washington State History Museum and Union Station on the other side. This unique pedestrian bridge has three massive Dale Chihuly glass artworks adorning the walkway. The Bridge of Glass is free for anyone to enjoy and is open 24/7 with lights illuminating the glassworks at night.

One of the first installations coming from Pacific Avenue is the Seaform Pavilion, featuring a glass ceiling stuffed with thousands of tiny glass pieces. Next, and most prominently in view from the city streets, is the Crystal Towers, somewhat resembling massive rock candy sticks. These blue sculptures are lit underneath at night, offering a different way to appreciate the glass form.

The third installation, the Venetian Wall, is a cabinet-like structure housing over 100 decorative glass-blown vases. It's a visual treat spectating all the glasswork along the Venetian Wall, with each sculpture warranting its moment of awe.

The Bridge of Glass is a great place to catch the sunset at the end of the day. Post sunset, the nearby Thea Foss Waterway has a lovely lighted walkway and several local restaurants with menus to peruse.

America's Car Museum is a world-renowned repository of classic and modern automobiles. The cars at ACM stem from the personal collection of Tacoma-natives Harold and Nancy LeMay. And today, the facility features hundreds of cars spanning the last century of manufacturing.

Car enthusiasts travel across the world to visit ACM. And the non-profit museum doesn't disappoint. It encompasses 165,000 square feet with over 300 cars on display, plus an additional 3.5-acre show field. Though the car displays roll in and out throughout the year, a few permanent exhibits touch upon themes like Route 66 and the British Invasion.

The whole day is easily spent at LeMays admiring the automobiles. Special experiences at the museum also extend a visit, including the popular "Speed Zone" package, which includes a ride in a racing simulator. The museum also regularly hosts outdoor events, including several classic car shows.

Tacoma's Museum of Glass (MOG) has a deep connection to the city. It's located in downtown Tacoma and was constructed atop an old Superfund site. The museum's construction kicked off restoration efforts of the surrounding Thea Foss Waterway neighborhood. And today, its unique architecture serves as a downtown beacon of art, culture, and revitalization.

The museum has several exhibits inside, all dedicated to different glass and glassblowing arts. Exhibits regularly rotate at MOG, offering something new to see with each visit. One permanent exhibition showcases the world's most renowned glassblowing artist, Dale Chihuly, a Tacoma native.

While the exhibitions catch the eye, the real attraction of MOG is the facility's Hot Shop and glassblowing studio. This unique facility is the largest and most active glass studio on the West Coast. Every day the museum is open, visitors have the chance to see the Hot Shop Team making delicate glass artworks. A microphoned MC narrates all the work happening.

The Washington State History Museum showcases the natural and cultural events that shaped today's current state of Washington. It's located opposite the Museum of Glass across Interstate 705 and connected by the Chihuly Bridge of Glass.

The main exhibit is the Great Hall of Washington History. This multi-room exhibit spans the time before dinosaurs to World War II and beyond. Subjects covered include Indigenous cultures, early statehood, and the booming railroad business. Great detail went into the Great Hall, with several exhibits that transport visitors back in time.

Another permanent exhibit shares the story of immigration and the many peoples that found a second home in the Pacific Northwest. The museum has also recently installed a permanent display detailing the long-term effects of Executive Order 9066, which led to the incarceration of American citizens with Japanese ancestry in 1942.

The museum is open Tuesday through Sunday. On the third Thursday of each month, the museum extends its hours and offers free admission until 8pm.

The Tacoma Art Museum is a central part of the downtown Tacoma Museum District. It encompasses a beautiful and sleek building that blends nicely into its urban environment. And on the inside is a remarkable collection that spans several galleries.

Dale Chihuly also has several pieces on display, chronicling his multi-decade career as a glassblower. The museum regularly rotates exhibitions, offering something new to see with each visit. While topics are often Pacific Northwest influenced, the museum does display artwork from across the globe.

Alongside a visual presence downtown, the Tacoma Art Museum also significantly impacts the local community. The museum offers a wide range of kid, teen, and adult classes throughout the year, as well as family programs. The museum also hosts several celebrated events, including Neighborhood Nights, every Thursday evening.

Within Point Defiance Park, the Point Defiance Zoo & Aquarium is the only combination zoo and aquarium in the Pacific Northwest. The facility encompasses 29 acres and several species of animals from across the world. Point Defiance is also home to hundreds of humans during operating hours, with approximately 700,000 visitors each year.

The zoo is accredited by the Association of Zoos & Aquariums, ensuring a high standard of care for the resident animals. Among many, a few notable residents include Sumatran tigers, red wolves, and polar bears. Different habitats separate the zoo, including an Asian Forest Sanctuary and an Arctic Tundra. The facility also has two massive aquariums representing the South Pacific and Pacific Seas.

The Foss Waterway Seaport is the northernmost museum in the Tacoma Museum District. It's along the Thea Foss Waterway and within the former Balfour Dock Building. This century-old facility used to be a wheat-transfer plant in the early 1900s and played a significant role in Tacoma's early development.

The complete restoration of the Balfour Dock Building into the Foss Waterway Seaport in the early 2000s marked a new chapter in the city. This timespan saw many facelifts in the downtown area, including the construction of other museums, like the Museum of Glass.

The primary mission of the facility centers on telling the maritime history of the city. The museum easily accomplishes that goal with several boats on display throughout the building. The museum's collection also comprises photographs, historical records, and other maritime artifacts. And today, walking into the Foss Waterway Seaport, all this history is fun to experience.

Wright Park is a charming natural space near Tacoma's Theater District, on the northside of downtown. It encompasses 27 acres and several species of trees. The entire park acts as an arboretum, with interpretive information about the different trees. But whether reading these signs or not, the lush foliage makes for a peaceful place to walk around.

The park is home to a popular playground and extensive splash pad. These two kid-favorite attractions are in the southwest corner of the park, near the public restrooms. On the northwest side of the park, a tranquil pond and fountain catch the eye and offer a nice place to sit.

W. W. Seymour Botanical Conservatory is also within Wright Park. This bright botanic center has several stunning displays of flowers throughout the year. The park and the conservatory have a long history tied to the city, and each has offered fun things to do in Tacoma for over 100 years.

Mount Rainier is the state's largest mountain and the most prominent peak in the Pacific Northwest. And besides espying it from city streets, residents and visitors to Tacoma can reach the base of Rainier with less than a 70-mile scenic drive.

The Nisqually entrance to the park is one of the closest areas and most visited from Tacoma. This entrance leads past memorable places to stop or spend the night, like the Longmire Historic District and Cougar Rock Campground. But the biggest appeal from the Nisqually entrance is its access to Paradise, the aptly named region on the mountain's southern flank, accessible from Tacoma with a two-hour drive.

Although Paradise lives up to its name, it represents only a tiny fraction of the national park's massive landscapes. The more primitive Mowich Lake area is closer to Tacoma, with a long gravel road approach. And like Seattle Park and Spray Falls, this impressive area also boasts big attractions within a short distance of the city. 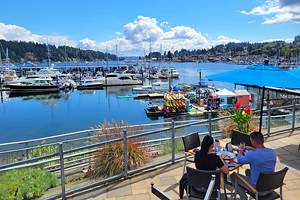 11 Top-Rated Things to Do in Gig Harbor, WA

12 Top-Rated Beaches in the Seattle Area

14 Top-Rated Things to Do in Seattle in Winter

12 Top-Rated Things to Do on Bainbridge Island, WA
Recent Articles