18 Top-Rated Things to Do in Salzburg

St. Stephen's Cathedral (Stephansdom) is not only the main Roman Catholic church in Vienna – and the seat of the city's Archbishop – it's also one of Austria's most popular attractions, welcoming more than a million guests each year. With its 137-meter-high spire and richly decorated roof, it's the city's most important Gothic edifice and represents eight centuries of architectural history.

All that remains of the original 13th-century structure are the massive gate and the Heathen Towers (Heidentürme), while extensive reconstruction in Gothic style took place in the 14th century. Later additions include the completion of the choir and the Chapels of St. Eligius, St. Tirna, and St. Catherine, while the South Tower, the Nave, and the Chapel of St. Barbara were added in the 15th century.

During WWII the building experienced nearly complete destruction. Its reconstruction, from 1948 until 1962, proved to be a tremendous communal effort involving the whole of Austria, demonstrating the nation's eagerness to restore this former symbol of the country's illustrious past.

To learn more about this must-see Austrian attraction, be sure to read through our guide to exploring St. Stephen's Cathedral, Vienna.

See also: Where to Stay near St. Stephen's Cathedral

The first thing you'll see as you enter Vienna's spectacular St. Stephen's Cathedral is the Late Romanesque Giant's Door. This magnificent feature is notable for its uncommonly rich ornamentation of dragons, birds, lions, monks, and demons, and was named after the mastodon bone found during construction in 1443.

Also of note is the Bishop's Gate. Originally reserved for female visitors, it boasts fine figurative sculptures from 1370, along with a number of coats-of-arms. The Singer Gate was the entry for male visitors, and is notable for its figures of the Apostles and the legend of St. Paul dating from 1378.

The spacious three-aisled interior of St. Stephen's is divided by clustered pillars on which stand life-size statues, including one of St. Christopher dating from 1470. The 16th-century pulpit is the most important work of art in the nave, a masterpiece of Late Gothic sculpture decorated with the figures of the Four Fathers of the Church.

On the plinth there's a representation of the sculptor, Master Pilgram, carved in the pose of a Peeping Tom. The Servants' Madonna dates from 1340 and, according to legend, was made after a maid turned to the Virgin for help after being wrongly accused of theft (she was soon after proven innocent).

Another interior highlight is the magnificent Late Gothic Organ Case from 1513, also by Pilgram (he's the figure with the compass and set square). The cathedral's spectacular organ is a sight to behold – and hear. Back in action in 2020 after a major restoration, this "new" organ in fact consists of two instruments that can be played together, and boasts more than 12,000 pipes. You can hear this magnificent musical instrument in action during regularly scheduled recitals and concerts (check out the cathedral's official site below for details).

Among the most notable of the cathedral's many Early Gothic stone figures is an especially fine Angel of the Annunciation and a statue of Our Lady the Protectress in the Women's Choir. Other highlights include the Wiener-Neustadter Altar from 1447 and the black marble High Altar from 1640, its statues representing the patron saints of the province, Leopold and Florian, and St. Roch and St. Sebastian, who were invoked in time of plague.

Also of note is Friedrich III's Raised Sepulchre in the south choir. Made of red marble and including a larger-than-life-size statue of the Emperor surrounded by coats of arms, the design is by Dutch artist Niclas Gerhaert van Leyden (1467-1513), who also made the top of this Gothic grave. The 15th-century Late Gothic Canopy over the Leopold Altar is also worth seeing, as is the Pötscher Madonna, an object of veneration in Austria and Hungary since the Battle of Zenta in 1697 when, according to legend, tears streamed from the eyes of the Madonna for a fortnight at the time of the battle against the Turks.

The first of many chapels you'll see upon entering St. Stephen's Cathedral is the Tirna Chapel. Built in 1359, it's the burial place of Prince Eugene, renowned as the conqueror of the Turks. In addition to the 15th-century Crucifix above the altar, take a peek at the beard of Christ: it's made of human hair and, according to legend, is still growing.

The most notable features of the Catherine Chapel are its marble font from 1481, and the reliefs on the 14-sided basin depicting Christ, John the Baptist, and the Twelve Apostles. Also of note, on its plinth, are the Four Evangelists. Also worth visiting is the Eligius Chapel, or Dukes' Chapel. Here, you'll find a number of important 14th-century statues.

St. Stephen's Cathedral is particularly famous for its majestic towers, which have dominated Vienna's skyline for centuries. The tallest of these is the Steffl, as the Viennese call the South Tower. Begun in 1356, it stands 137-meters high and is considered the most beautiful German Gothic tower in Europe thanks to features such as the statues below the richly ornamented canopies on the second floor.

While it's a tough climb up the 343 spiral steps to the Watch Room, it's worth it for the spectacular views. They are considered the best views over Vienna's historic city center, including the magnificent Hofburg and the spectacular Belvedere Palace. It also impresses with the knowledge that this viewpoint was used as early as the 1400s by watchmen on the lookout for fires.

Also worth visiting is the Cathedral's North Tower, home to the massive Pummerin Bell, rung only on special occasions such as New Year's Eve. A fast lift takes visitors to a viewing platform where you can get an up-close look at the cathedral's famous roof tiles.

The Catacombs and the Cathedral Treasure

One of the top things to do when visiting St. Stephen's Cathedral is to pay a visit to the must-see Catacombs, the entrance to which is through a chamber under the North Tower. Accessible only as part of a guided tour, they extend from the Cathedral Choir all the way to Stephansplatz and include the bones of around 10,000 Viennese citizens stacked up in tiers (this part is not open to the public).

Constructed at the end of the 14th-century to house remains from the area's overcrowded graveyards, the Catacombs were closed in 1783. Today, the major attraction is the Ducal Vault, which Rudolf IV had constructed for the Habsburgs in 1363.

Also worth seeing is the Cathedral Treasure. Located in the West Gallery, this fascinating exhibit houses many of the cathedral's most important – and valuable – objects.

A variety of English language guided tours of St. Stephen's Cathedral are available. The most comprehensive is the All Inclusive Tour encompassing the cathedral, the catacombs, both the south and north towers, and the Cathedral Treasure. Individual tours can also be booked for specific areas of the cathedral, along with special 1.5-hour evening tours, which include a fun roof walk and a visit to the cathedral attic, Saturdays from July to September.

A great option for those wanting to take in other top tourist attractions in the city is to join a city walking tour of Vienna. In addition to the cathedral, highlights of this fun 2.5-hour, small group guided tour include the magnificent Hofburg Imperial Palace, the famous Spanish Riding School, and other landmarks such as Heroes' Square.

Where to Stay near St. Stephen's Cathedral

We recommend these excellent hotels within walking distance of St. Stephen's Cathedral in Vienna:

Tips and Tactics: How to Make the Most of Your Visit to St. Stephen's Cathedral

Getting to St. Stephen's Cathedral

Vienna's most important landmark, St. Stephen's Cathedral is the heart and soul of Stephansplatz, an important square that marks the city's geographical center. Noted for its interesting mix of new and old architectural styles, it's a wonderful place to simply hang out and watch the world pass by from the comfort of a café patio, or perhaps do some shopping.

If you're still hankering for a little more sightseeing, be sure to visit the many historic old buildings lining the square. Of particular interest are No. 2, the Globe (Zur Weltkugel); No. 3, the Election House (Das Churhaus); and No. 7, the Archbishop's Palace.

Also of note are a number of colored stones that mark the outline of the Chapel of Mary Magdalene, in which burial services were once held. First documented in 1378, it burned down in 1781 and was rediscovered during construction of the Stephansplatz U-Bahn station. 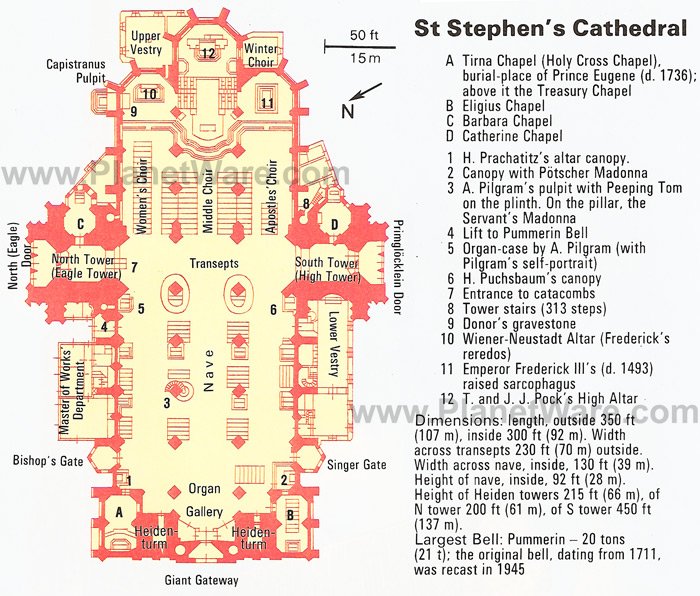 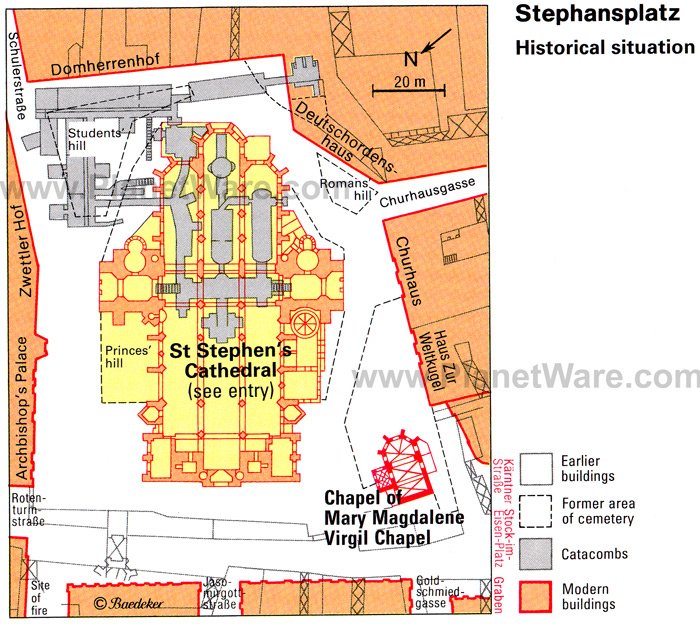 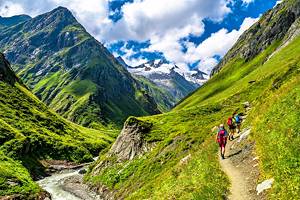 22 Most Beautiful Islands in the World
BE INSPIRED!
MORE PICTURES OF AUSTRIA