Written by Lana Law
Updated Sep 26, 2022
We may earn a commission from affiliate links ()

Home to the lovely Ozark Mountains, culturally rich capitals, and deep threads of United States history, Missouri offers a long list of attractions. While there are plenty of things to see and do in Kansas City and St. Louis, other sights and cities in Missouri offer even more to explore.

Branson is a wonderful place for outdoor attractions, as well as its thriving live music scene, and the Wilson Creek National Battlefield in Springfield preserves a dynamic moment in Civil War history. To really savor the flavor of Missouri relaxation, Lake of the Ozarks, and its welcoming waters, is a defining vacation destination, with resorts, campgrounds, and thousands of miles of shoreline.

Plan your itinerary with our list of the top attractions in Missouri.

The Gateway Arch is the iconic structure that visually defines St. Louis and is also the symbolic "Gateway to the West."

Visitors can take a tram up to a viewing platform at the top, which reaches 630 feet, for stunning views out over the city. Tram rides include a series of exhibits about the history of the arch, and visitors can also explore the numerous galleries within the Museum at Gateway Arch.

The arch is located in Jefferson National Expansion Memorial Park but can be seen from all over the city and even from great distances on the surrounding highways.

Other ways to enjoy the arch are helicopter tours, riverboat cruises, and visiting the Old Courthouse for some historical perspective on the area.

Accommodation: Where to Stay in St. Louis: Best Areas & Hotels

2. Hear the Music in Branson

Branson, in southwest Missouri, with no false modesty, calls itself the "Live country music capital of the universe." It draws millions of tourists each year, mainly country music fans.

The "Strip" is crowded with music palaces, motels, restaurants, and souvenir booths selling all imaginable kinds of kitsch. The music venues here host some of country music's greatest performers.

Branson is also a good base for excursions into the surrounding Ozark Mountains. Natural points of interest include Table Rock Lake State Park and Talking Rocks Cavern.

A fun way to experience Branson's wild side is to hop aboard the Branson Scenic Railroad, complete with refurbished 1930s passenger cars. For more adrenaline action, the roller coasters and rides at Silver Dollar City provide the thrills.

One of Kansas City's most important cultural attractions is the Nelson Atkins Museum of Art. It holds a comprehensive collection, with pieces from around the world, but with a particular emphasis on East Asian art. On the museum grounds is a sculpture garden that everyone can appreciate without even having to enter the building.

Admission is always free to the Nelson-Atkins Museum of Art, and rotating exhibits keep each visit unique. Community events at the museum include free-fun weekends for the family, live music on every third Thursday of the month, and a wide variety of art classes for all ages.

Marvel Cave is part of Silver Dollar City. It carries on the tradition of the 1880s mining town, which once stood at the entrance to the cave. The cave was first discovered by the Osage Indians in the 1500s and since that time has attracted explorers looking for the Fountain of Youth, miners of marble and bat guano, and archaeologists.

5. Visit the Animals at the Saint Louis Zoo

One of the best free things to do in Missouri is visit the Saint Louis Zoo. Take the family to see the animals and keep your wallet in your pocket. You won't lack for furry creatures to see – the zoo has over 14,000 animals from around the world, which represent almost 500 species.

The zoo has six major regions: River's Edge, The Wild, Discovery Corner, Historic Hill, Red Rocks, and Lakeside Crossing. Each of these areas has its own set of animals related to that particular environment.

The zoo also offers popular behind-the-scenes tours for a fee, including opportunities to hand-feed reticulated giraffes, see the incubator area for the zoo's rare birds, meet the staff at the park veterinary hospital, and help prepare specialty meals with the zoo's nutritionists.

Host to the 1904 World Fair, this wonderful St. Louis city park sprawls out over more than 1,300 acres and receives millions of visitors a year.

Regarded as one of the most beautiful urban parks in the world, Forest Park not only delivers appealing natural settings via ponds, gardens, and more than 45,000 trees, but it's also home to many of the city's top cultural attractions.

Tourists can visit the St. Louis Zoo, Saint Louis Art Museum, the Missouri History Museum, and the St. Louis Science Center all on the grounds, or enjoy a live show at The Muny, America's oldest and largest outdoor musical theater.

Around 5,400 Union troops and 11,000 Confederates fought on the site of Wilson's Creek National Battlefield on August 10, 1861. The Confederates were victorious, but this battle led to more fighting in Missouri.

On site is the Wilson's Creek Civil War Museum housing artifacts that include the sword belt and sash of Arkansas General Patrick Cleburne.

Visitors can tour the battlefield and remaining historical structures via a 4.9-mile tour road, which provides plenty of parking spots to explore the seven miles of trails that connect throughout this scenic area.

Accommodation: Where to Stay near Wilson's Creek National Battlefield

Samuel Clemens, before adopting the pen name Mark Twain, first moved into this two-story home with his family in 1843 and lived there from the age of seven to 18. The home has been open for public tours since 1912 and has since been restored and decorated in period.

The adjoining museum consists of two buildings that contain Twain memorabilia, such as first editions of his books, photographs, original manuscripts, and the desk where he sat to write The Adventures of Tom Sawyer.

Historic and artistic objects are displayed at the Harry S. Truman Presidential Library and Museum in Independence. Truman's career and US history covering the period from 1945 to 1953 is the main focus of the museum. A replica of Truman's office in the White House is on display, and President and Mrs. Truman's graves are in the courtyard.

A mile down the road, at the Harry S. Truman National Historic Site, visitors can tour the Victorian home where the Truman family lived from 1919 until his death in 1972. The house contains original furnishings and other Truman family possessions.

10. Enjoy Nature at the Lake of the Ozarks

Created by an impoundment of the Osage River in 1931, Lake of the Ozarks is one of the most popular lake destinations in the Midwest. Favorite reasons to visit include professionally designed golf courses, scenic campgrounds, and lakefront resorts, as well as an array of water activities including boating, fishing, and swimming at sandy beaches.

Lake of the Ozarks State Park is reason enough to visit, but the massive shoreline offers plenty of attractions and things to do, including shopping, dining, and a community that always welcomes out-of-towners. To see the marvel of engineering that created the Lake of the Ozarks, a drive over the Bagnell Dam is recommended.

Another top attraction in the area is Bridal Cave located in Camdenton. This subterranean cathedral beneath Thunder Mountain was used by Native Americans for centuries. Today it's a major tourist attraction known for its beautiful rock formations.

Home to one of the largest collections of World War I artifacts in the world, the National World War I Museum first opened in 2006 and has since hosted millions of visitors from around the world. Long before the museum was established, the adjacent Liberty Memorial has looked over the streets of Kansas City for more than 90 years.

Completed in 1926 and dedicated by President Calvin Coolidge in front of a massive crowd, the Liberty Memorial still stands tribute today to the Great War. Visitors to the museum can learn more about this history through interactive exhibits, documented eye-witness accounts, and more than 75,000 historical items on rotating display.

12. See the Sights of Jefferson City

As the state capitol, Jefferson City is worth a visit. The museums and galleries are home to some of the finest collections in the state, and the historic government buildings give the city a well defined sense of grandeur.

Accommodation: Where to Stay in Jefferson City

Springfield is a lovely city with a small town feel and all kinds of parks, green space, and other attractions.

Among the outdoor highlights are the Nathanael Greene/Close Memorial Park, with walking trails, gardens, and playgrounds, and the beautifully laid out Mizumoto Japanese Stroll Garden.

Another interesting site near Springfield is the Fantastic Caverns, which claims to be "America's only drive-through caverns." There is no walking required on this tram tour of the cave.

Another popular Springfield attraction is the Wonders of Wildlife National Museum and Aquarium, adjacent to the original Bass Pro Shops Outdoor World, which provides a look into an underwater world.

Accommodation: Where to Stay in Springfield

Spread out over 79 acres, the Missouri Botanical Garden is a wonderful spot for a stroll. One of the state's National Historic Landmarks, the gardens date from 1859.

Not content to rest on its historical laurels, the gardens are undertaking a significant upgrade to their facilities with the new addition of the Jack C. Taylor Visitor Center.

One of the highlights of a trip to the gardens is to experience the Climatron. This giant geodesic dome encloses 24,000 square feet, and growing within are 2,800 plants spread over 1,400 species.

Other notable places to visit in the gardens are the Japanese Garden and the Linnean House. A tram runs throughout the park on the half hour.

Located in Columbia, the university is the heart of the city, with a lovely campus that radiates from the David R. Francis Quadrangle. As popular with locals and tourists as it is with students, this picturesque area is on the National Register of Historic Places. It is home to the stunning Jesse Hall and six imposing columns that are the last remains of Academic Hall, which was destroyed in a fire in 1892.

There are many cultural events on campus throughout the year, and the university is also home to the Museum of Art and Archaeology. This free museum offers a wide range of exhibits, as well as docent-led tours and workshops.

Accommodation: Where to Stay in Columbia

Read More: Top-Rated Attractions & Things to Do in Columbia, MO 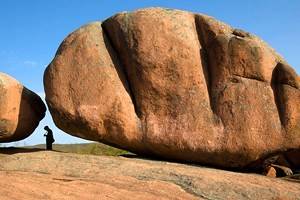 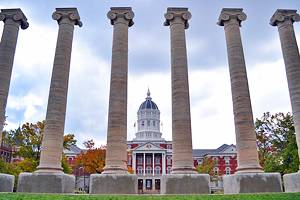 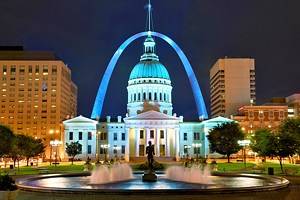 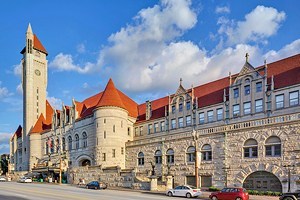 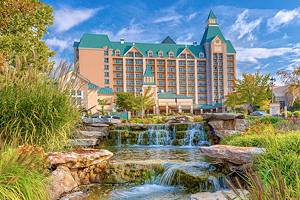 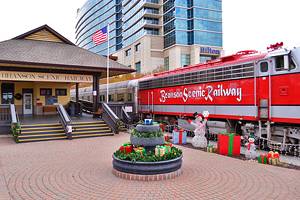 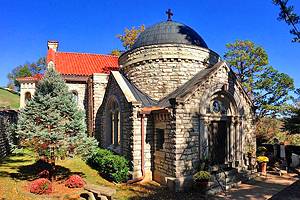 22 Most Beautiful Islands in the World
BE INSPIRED!
More Pictures of Missouri