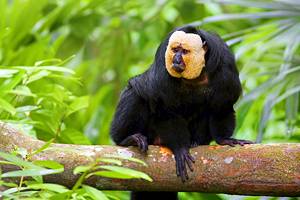 The capital, Cayenne, is a melting pot of French, Asian, African, and Brazilian cultures, and if you visit during Carnival, between Epiphany and Ash Wednesday, you can join in the celebrations with parades every weekend.

Eco-tourism prevails in the country's largely unspoiled wilderness, which is home to an astounding diversity of wildlife. Along the coast, nature lovers can explore bird-rich marshes, where caimans lurk, and Atlantic beaches, where turtles nest in droves. Inland, vast savanna stretches to lushly cloaked mountains, and rivers slice through steamy jungle.

Traveling through this pricey French outpost can be challenging (especially for those who don't speak French), as the country lacks a well-developed tourist infrastructure. Less experienced travelers will benefit from using a tour company. Intrepid travelers will welcome the adventure.

Learn about the best places to visit in this country of contrasts with our list of the top attractions in French Guiana.

In 1931, Frenchman Henri Charrière was convicted of a murder he did not commit. He was sentenced to life imprisonment at the penal colony on Devil's Island, one of the infamous Îles du Salut, where shark-infested waters lash the rocky shores. After surviving 12 years of horrific conditions, he escaped to Venezuela. The book and movie, Papillon, recount his ordeal.

Today, a trip to the islands, about 11 kilometers offshore from Kourou, brings his story to life. Most visitors arrive at Île Royale, the largest of the three islands and the former administrative headquarters for the colony. The buildings have been converted to hotels and tourist facilities, and an abundant array of wildlife now inhabits the island, including macaws, monkeys, and agouti.

At the gift shop, you can buy postcards stamped "Devil's Island," and the harbor now welcomes cruise ships where prisoners were once disgorged.

Île St Joseph was reserved for solitary confinement for those prisoners at Devil's Island, and Île du Diable (Devil's Island) is now closed to the public.

Accommodation: Where to Stay in French Guiana

In the northwest corner of French Guiana, Plage les Hattes at Awala-Yalimapo is the most important single nesting site in the world for giant leatherback turtles.

During the peak season from April to July, more than 80 leatherbacks lumber up the beach in a single night. Their eggs hatch between July and September. This three-kilometer stretch of beach is also an important nesting site for green turtles and, on occasion, Olive Ridley and hawksbill turtles. Before heading to the beach, you can learn about these gentle creatures at the small local museum.

Also at Awala-Yalimapo are many Amerindian settlements, and you can cruise up the Maroni River and visit a permanent traditional village.

Apparently, rockets and rainforests are a good mix in French Guiana. In 1964, the French government chose this jungle-fringed slice of equatorial coast near Kourou for a space center, thanks to its low population density and distance from storm tracks and earthquake zones.

Three separate organizations operate at the Kourou Space Centre: the European Space Agency; the French Space Agency; and Arianespace, a private commercial enterprise developing the Ariane rocket. Aided by French-speaking guides, you can view a film tracing the history of the Space Centre and tour the Jupiter Control Centre and Ariane facilities. The free tours last about three hours.

A highlight of a visit to French Guiana is the chance to view a space launch from the jungle. The center conducts up to nine annually, and tourists can witness the spectacle by reserving a free ticket in advance (or just head to the beach and view it from there). See the website for launch dates.

Also here, the Space Museum illuminates the history of space through seven themed modules. Audio-visual and slide presentations provide added details and include the preparation and launch of Ariane from the Space Centre.

A 1.5- to 2-hour drive from Cayenne, the wildlife-rich marshes of Kaw cover thousands of square kilometers. The Tresór Nature Reserve encompasses a huge area of the Kaw ecosystem and is a great place to observe black caimans, a smaller relative of the American alligator, as well as a rich diversity of birdlife, such as the scarlet ibis.

Most tourists explore the wetlands on guided sightseeing tours aboard local boats that vary considerably in comfort. When booking boat tours, be sure to ask about shade canopies and seat cushions. Options include day or night trips, as well as a 24-hour excursion with an overnight stay in an Amerindian-style hut. Although this is one of French Guiana's most accessible wildlife areas, it is still well off the beaten track.

Set deep in the jungle, Zoo Guyane feels more like a wildlife sanctuary than a zoo. Here, you can see animals native to the Amazon in natural settings, where local wildlife is also free to wander the grounds. The focus is on animals native to French Guiana, so this is a great place to get acquainted with the country's wildlife before you venture into the wilderness.

The 450-plus animals in the zoo's collection represent around 75 different species, and you can access the naturalistic exhibits on a series of well-signposted trails through lush vegetation.

Sloths, agoutis, crocodiles, howler monkeys, anteaters, and a panoply of birds, such as toucans and macaws are just some of the residents at Zoo de Guyane. But, arguably, it's the big cats that steal the show – make sure you try and catch the jaguar feeding.

Kids and adults alike will love the treetop walk, strung through a canopy of native forest, and the children's playground is a hit with younger children.

Squirrel monkeys are the main attraction at lovely little Ilet la Mère. This uninhabited island lies about a 30-minute boat trip from the marina at Dégrad des Cannes, just outside Cayenne. These gentle little critters have no fear – be prepared for them to jump on your shoulders and rifle through your bags.

Besides photo ops with the monkeys, popular things to do on the island include strolling around the walking trails, swimming and basking on the small beach, and enjoying a picnic, but you must bring your own food, as the island has no facilities. Local tour operators offer both half-day and full-day trips to the island.

If you're seeking a beach fix, you'll find Cayenne's best stretch of sand and sea at Remire-Montjoly. French Guiana beaches are typically wild, windswept affairs, and this beach is no different, but it does have a narrow, strip of golden shoreline that is great for sunbathing. Palms and lush greenery fringe the sand, providing welcome patches of shade.

The silty waters here are not ideal for swimming but they're decent enough for a quick dip after a hike in the nearby nature reserve. You might spot sea turtles here during nesting season.

Fort Diamant presides on the point of the Cayenne Peninsula, and you can also see the ruins of an old sugar mill. From the town of Rémire-Montjoly, the scenic five-kilometer Rorotá Trail (Sentier du Rorotá) ascends Mahury Mountain with the chance to see wide-eyed sloths clinging to the trees.

Paddling along a jungle-fringed river in a local boat is an exhilarating way to explore French Guiana's seemingly impenetrable wilderness. The rivers flow through the heart of the steamy jungle and are the best way to travel between remote villages and see wildlife in its natural habitat, including capybara, caiman, and monkeys. Typically, guides offer cruises in pirogues, dugout canoes carved from local wood.

One of the most popular rivers to paddle is the Maroni River, on the border of French Guiana and Suriname. This is the country's longest and most populated waterway and provides a chance to encounter Amerindians and Maroons and learn about their culture.

Another option is the Oyapock River. Rich in gold mining history, it offers both a wilderness experience and a chance to meet Amerindians and Brazilians, who make their home along its banks. On the Approuague River, paddlers will find the highest rapids in French Guiana, as well as pristine forests.

In the border town of Saint-Laurent-du-Maroni, at the chilling Camp de la Transportation, prisoners arrived for processing and transfer to penal colonies throughout the territory. After walking through the same gates as former inmates Alfred Dreyfus and Papillon, you can see rusty shackles and solitary confinement cells with tiny windows. Abundant foliage has softened some of the grim history here, but the impression of past brutality lingers.

Self-guided tours are free, or for a fee, French-speaking guides will take you on a more detailed tour. Look for Papillon's name engraved in one of the cells, and bring water and sun protection, as it can be hot walking around in the blazing sun.

For a spicy snapshot of local life, head to Cayenne's main market in Place Victor Schoelcher. This town square is named after the man who ended slavery in French Guiana, and shopping here is one of the top things to do in Cayenne while you're visiting French Guiana.

Exotic aromas waft through the air, and the market stalls brim with tropical fruits, perfumes, fragrant spices, and Asian-inspired snacks. You can relax with a hot bowl of Vietnamese noodle soup, sip tropical juices, pick up some fresh-plucked produce, or purchase locally made handicrafts and souvenirs.

Near the Place de Palmistes, Cayenne's liveliest plaza, the Musée Départemental De Franconie offers an overview of the country's history, as well as its flora and fauna. The museum tucks into a simple wooden Creole house built in the 19th century by the Franconie family. Exhibits cover indigenous people, colonial history, and the penal colony, but the signs are only in French. Of note are the large stuffed black caiman and the Butterfly Room.

On the Comté River south of the capital, Cacao is a popular day trip from Cayenne. Hmong refugees transplanted from Laos in the 1970s are the main ethnic group in this small Asian village of wooden stilt houses.

Sunday is the best day to visit, when the popular market features Hmong embroidery and weaving, as well as local noodle soups. The insect museum, Le Planeur Bleu, is also worth a stop for its extensive bug and butterfly collections and impressive specimens of scorpions and spiders.

From the village, you can also embark on a scenic hike through the misty jungle or paddle the river in a canoe.

When is the best time to visit French Guiana?

French Guiana is hot and humid almost all year. The best time to visit is the dry season, from July through November. Try to avoid the months of April through June, when heavy downpours and high humidity can make traveling through the country sticky and uncomfortable.

French Guiana's food reflects its rich mix of cultures. Depending on where you travel, you'll find everything from French, Creole, Caribbean, and Vietnamese to Chinese and South American specialties on the menus. Popular dishes include a palm-pulp concoction called Awara broth, as well as "Blaff," a tomato-based broth with peppers and fish. Staples include rice and beans with local game meat, as well as traditional stews and seafood dishes like bouillon d'aurora, a mix of smoked fish, vegetables, and sometimes chicken.

Crime rates in French Guiana are relatively low, but it's always wise to exercise caution in the cities and remote areas – avoid going out alone after dark, and don't carry large amounts of cash or valuables. 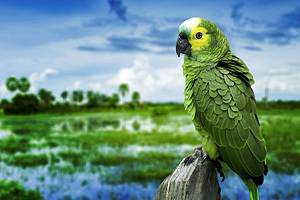 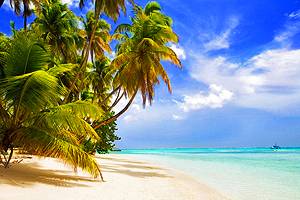 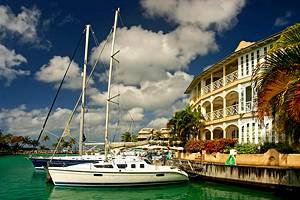 19 Top-Rated Attractions & Things to Do in Barbados 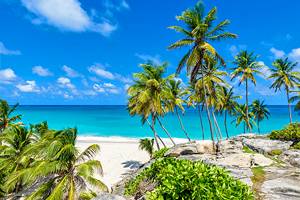 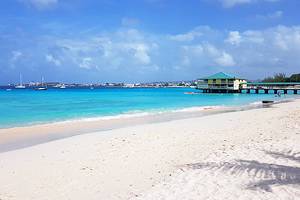 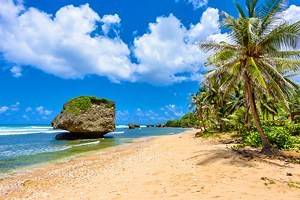 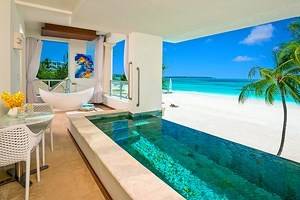 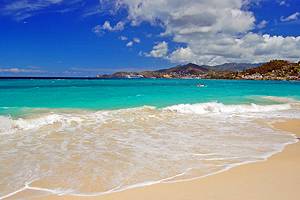 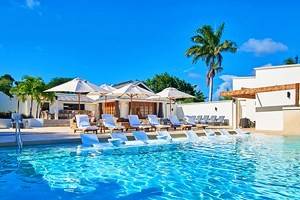 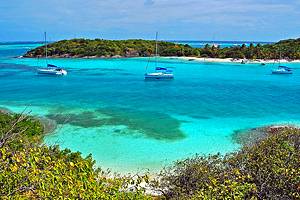 12 Top-Rated Tourist Attractions in St. Vincent and the Grenadines 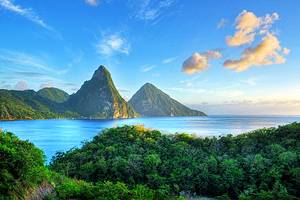 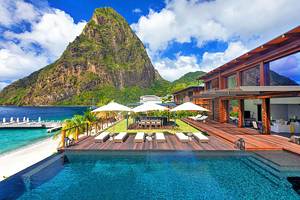 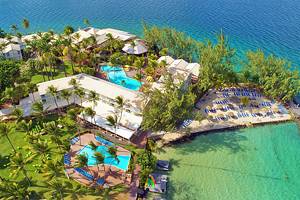 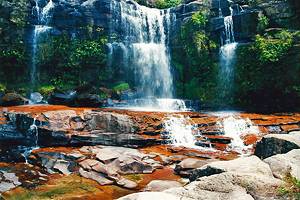 22 Most Beautiful Islands in the World
BE INSPIRED!
MORE PICTURES OF FRENCH GUIANA