The Negev Region is a desert adventurer's dream packed with tourist attractions, from ancient ruins to ruggedly handsome desert scenery.

For wilderness lovers, and anyone who appreciates natural beauty, this is one of the best places to visit in the country, with plenty of opportunities for hiking complete with scenic desert landscapes, including the weird and wonderful panoramas from the top of Makhtesh Ramon.

The extraordinary old Nabataean caravan towns and UNESCO World Heritage sites of Shivta, Avdat, and Mampsis offer a feast of interesting things to do for history lovers.

Help plan your trip with our list of the top tourist attractions in the Negev.

Shivta (ancient Subeita) is home to the astonishingly well-preserved ruins of a 5th- and 6th-century Byzantine city, with three monastic churches, dwellings, water cisterns, and paved streets all visible.

It was first built and used by the Nabataeans during the 1st century BC and later rebuilt by the Byzantines. Although the ruins are all from the later Byantine stage, Shivta earns its UNESCO World Heritage Site status from its earlier Nabataean habitation, as part of the Desert Cities Incense Route in the Negev.

On entering the site, you first come to the three-aisled basilica of the South Church. Built against the church is a mosque dating from the 7th century.

A little way north of the church is the Council House, which stands at the intersection of two streets.

Taking the street to the left brings you to the Middle Church of which only a few sections of wall and the south apse survive.

Continuing north, you pass through the craftsmen's quarter, with pottery kiln, workshops, and baker's oven, before arriving at the North Church.

This Nabatean trading post, about 17 kilometers southeast of Shivta, was first founded in the 3rd century BC and was an important pit stop on the incense trading route between Gaza and Eilat.

Due to its location, near Egypt's Sinai Peninsula, it gained prominence during the early Byzantine era, when pilgrims used Nitzana as a stop along the way to or from St. Catherine's Monastery. The sparse ruins at the site today date from this period.

Archaeological excavations carried out in 1935 revealed two church ruins (one with a mosaic pavement) and a fort.

There are also ruins from the modern era here, including an Ottoman-era hospital, train station, and well.

Famed in the Old Testament as the city of the Patriarchs, Be'er Sheva has developed within a few decades into the "capital of the Negev" and one of the largest cities in Israel.

The earliest settlement in the area (Tel Sheva) lies four kilometers northeast of the modern town and is the main highlight of a visit to Be'er Sheva.

Once the town of Beersheba, mentioned in the Bible, Tel Sheva has remains of underground dwellings, defensive walls, cisterns, and water channels dating through several settlement periods.

Excavation work here has revealed settlement of the site dates back to the 4th millennium BC in the Chalcolithic era.

A number of finds from the site can be seen in the Israel Museum in Jerusalem.

In the modern town of Be'er Shiva itself, the main tourist attraction is the Thursday Bedouin Market (Eilat Road), where you can search out cushions, camel saddles, copperware, and numerous other craftwork.

The Museum of Negev Art is on Ha'atzmaut Street, set in an Ottoman-era building. At the southeast end of this street is a restored well, known as Abraham's Well (though it probably only dates from the Ottoman period).

This museum, dedicated to local Bedouin culture, has an intriguing and interesting ethnographic collection that includes exhibits of clothing, other textiles, domestic and agricultural equipment, silver jewelry, and various other everyday objects.

The exhibits are well presented and provide a good introduction to the art and culture of the various Bedouin tribes of the Negev, who have called this desert home for centuries.

Anyone who is interested in nomadic cultures and concerned with how this culture is dying out due to forced settlement should definitely pop in for a visit.

Prominently situated on a hill, the UNESCO World Heritage Site of Avdat is one of the most important sites of the Nabataean, Roman, and Byzantine periods in the Negev.

It was first settled in the 3rd century BC, when nomadic Nabataean tribes began to settle and take over the spice trade routes through the region.

Later, the town thrived under Roman and then Byzantine occupation until finally being abandoned after the Arabs captured the town in AD 634.

Just before the entry to the site proper is a Nabataean tomb, with a doorway lintel relief depicting a horned altar flanked by the moon, sun, and a star. From the entry, a path leads north through a Roman-era residential quarter, where you can also see a stone bearing a Nabataean inscription.

The path runs through the south gate into a rectangular Byzantine fortress. There is an excellent view over the entire site from the southeast corner here.

Adjoining the western side of the fortress is a sacred precinct, which dates from the Byzantine period and contains two churches built on the sites of earlier Nabataean and Roman temples. Here, you find the Church of St. Theodore; a three-aisled basilica dedicated to a Greek martyr of the 4th century.

Nearby, is the North Church with its preserved consoles supporting the roof beams in the southern aisle.

Near the Avdat ruins is one of the most surprising natural wonders of the Negev.

The spring of En Avdat lies in the middle of a barren upland region of almost oppressive austerity. Here, four springs emerge from the rock, falling into a tranquil pool.

Every morning and evening, the ibexes that live in the area come down to drink the water, so if you arrive at this time you can sneak some wilderness spotting into your itinerary as well.

Ancient Mampsis (Hebrew "Mamshit," Arabic "Kurnub"), with its remarkable ruins, is the most northerly Nabataean town in the Negev and like Avdat and Shivta is a UNESCO World Heritage Site.

Excavations between 1965 and 1973 brought to light a Nabataean settlement that had undergone little change in Byzantine times, so that its original character is better preserved than at Avdat, Nitzana, or Shivta.

It was founded during the period when the Nabataeans, from their capital at Petra, set out to colonise the Negev. It prospered in the 1st century AD as a trading town with a caravanserai, stables, residential areas, and administrative buildings.

After the fall of Nabataeans in AD 106, the Romans built barracks here. In Byzantine times (when Mampsis featured on the mosaic map at Madaba), the old Nabataean system of irrigation was brought into use again, as it was at Avdat, and two churches were built.

The town was destroyed during the Arab conquest in the 7th century.

Entering through the north gate in the town walls, you continue along ancient streets between blocks of houses to two large administrative buildings.

In one of the buildings, the arches have been preserved and it is possible to climb to the upper floor, from where there is a fine general view of the site. The West Church is built against the town walls. This aisled basilica was built by St. Nilus of Sinai in about AD 400.

Immediately in front of the ruins of a police post from the British Mandate period is the East Church, which was dedicated to the Holy Martyrs. It is approached by a broad flight of steps leading up from a square that, from Nabataean to Byzantine times, was the market place. A mosaic pavement in the nave has been preserved.

Other interesting buildings in Mampsis identified by signs, include stables, a portico with Nabataean horn-capitals, and a building with well-preserved wall paintings.

To the west of the site, far below in the wadi, you can see the dams, which enabled the Nabataeans and Byzantines to store water during the short rainy season for use during the arid summer months.

Ben-Gurion's House, with its interior largely unchanged since he died, is the main attraction here and holds a small but interesting collection of old black-and-white photographs and original letters and documents written by Ben-Gurion.

In a carefully tended cliff top park nearby, you can also visit Ben-Gurion and his wife's tomb. There are incredible views over the surrounding area from here.

The largest of the three elliptical craters known as "mortars" (makhtesh) in the Negev is Makhtesh Ramon, 30 kilometers long by eight kilometers wide.

It is not a volcanic crater, but was formed 70 million years ago by the collapse of the land over underground cavities.

Huge fossils of saurians, which lived 150 million years ago, have been found here.

The little town of Mitzpe Ramon has impressive views into the crater, with the bottom 500 meters lower down.

On the east side are the remains of forts, notably Meẕad Mishẖor, built by the Nabataeans in the 1st century BC to protect the caravan route from their capital, Petra, to Avdat and via Subeita to Nitzana.

Makhtesh Hagadol (the "Great Mortar") is the middle one of three erosion craters in the Negev, smaller than Makhtesh Ramon but just as interesting for walkers and nature lovers.

Like Makhtesh HaKatan, the "Little Mortar," it lies to the north of the Wilderness of Zin. Both can be accessed and explored by walking trails down into the crater.

The best base for both Makhtesh Hagadol and Makhtesh HaKatan is the small town of Yeruham, where those who don't want to hike independently can also find guides.

History of the Negev

The Negev seems to have become an arid area between 10,000 and 7,500 BC. In the 18th century BC, Abraham came from the north to Beersheba. In the later second millennium BC, the Negev was occupied by three peoples - to the north, around Arad, the Canaanites who had advanced farthest south; to the south, the Amalekites, whom David exterminated around 1,000 BC; to the east, around the Arava depression, the Edomites, who moved north in the sixth century BC, settled between Beersheba and Hebron, and became known as the Idumaeans.

From the first century BC, the Nabataeans sought to settle and cultivate the Negev from their capital at Petra. They achieved this with the help of ingenious methods of irrigation, and towns like Avdat, Subeita, and Mampsis were established.

In the 4th to 6th centuries, the Byzantines took over from the Nabataeans and developed the region still further.

After the arrival of the Arabs, who in other countries had improved irrigation methods, the irrigation systems of the Negev broke down, and for more than a thousand years, the Negev became an arid region inhabited by Bedouin.

The decisive impulse to make the land fertile again was given by David Ben-Gurion, a member of the kibbutz of Sde Boker, who established a university there for the study of the Negev.

A scientific basis for the development of the region was provided by Michael Evenari, a botanist of German origin, who established a farm at Avdat using Nabataean methods and founded a plant research institute in Be'er Sheva.

Of great importance for the resettlement of the Negev was the creation of the National Water Carrier, which brings water from northern Israel to the Negev. 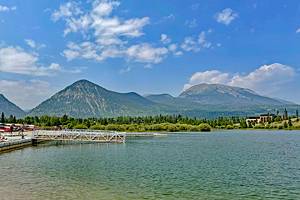 10 Top-Rated Things to Do in Frisco, CO
BE INSPIRED

17 Most Beautiful Islands in the World
BE INSPIRED!
MORE PICTURES OF ISRAEL
Destinations
popular right now
> 12 Top-Rated Tourist Attractions in Israel and the Palestinian Territories