Fourth holiest city of Islam (after Mecca, Medina, and Jerusalem), Kairouan is an important religious pilgrimage site, and for history lovers, one of Tunisia's star tourist attractions.

This bustling city is jam-packed with sightseeing opportunities and things to do, and contains some of the country's best examples of Islamic architecture, from grand mosques and tombs with ornate decoration to the medina back alleys lined with candy-colored houses.

Kairouan is also a major shopping destination and is famous for the quality of its carpets. When all the craning your neck at mosque minarets and admiring gorgeous tile work gets too much, it's time to hit the souks for a bit of bargaining with the town's many craftsmen.

Plan your time in this historic center with our list of the top attractions and best places to visit in Kairouan.

Kairouan's medina (old town) is the most atmospheric and best preserved in Tunisia, the tightly packed alleyways giving a taste of the Arab empires. Unlike the prettified old towns of Hammamet and Djerba, the old town here is the real deal, and strolling the lanes is number one on most visitor's things to do list.

The medina is surrounded by a 3.5-kilometer-long circuit of brick walls reinforced by numerous towers built by the Husseinites in the early 18th century. Inside the walls, lanes ramble in a maze of directions. The best way to explore is simply to throw away the map and wander.

As well as being home to most of Kairouan's tourist sightseeing draws, the narrow roads lined with colorful, paint-peeling houses are attractions themselves.

You could spend hours here just soaking up the old town's beautiful architecture. Even if you're short on time, don't miss spending a few hours just walking around.

Accommodation: Where to Stay in Kairouan

One of Kairouan's major points of interest, the Great Mosque stands in the northeast corner of the medina, its massive minaret incorporated into the town walls.

This is the oldest and most important Islamic building in North Africa and was originally built by Uqba ibn Nafi, the Arab commander who founded Kairouan in 672 CE.

Many of Tunisia's other major mosques, including the Great Mosque of Sousse, took their inspiration from Kairouan's Great Mosque architecture.

The mosque covers a mammoth area, 135 meters long by 80 meters wide, with a vast inner courtyard surrounded on three sides by double-aisled colonnades of antique columns.

Non-Muslims can enter the courtyard area but are not allowed to enter the prayer hall, though the doors are often kept open, so you can have a peek inside.

3. Mosque of the Barber

The Barber's Mosque (also called the Zaouia of Sidi Sahab) is not to be missed on a medina visit.

The complex includes a mausoleum, mosque, and madrassa (Islamic school of learning) and was built between 1629 and 1692 over the tomb of one of Muhammad's (the prophet of Islam) companions, who died in CE 685.

According to legend, Sidi Sahab always carried a few hairs from Muhammad's beard out of reverence for the prophet, hence the mosque's name.

The complex is notable for its magnificent tile decoration, much of which dates only from the 19th century.

You enter through a forecourt, on the left of which are the imam's lodgings, guest rooms, and ablution fountains. Opposite the entrance is the minaret.

The forecourt also gives access to the madrassa, laid out around a small courtyard; the prayer hall beyond it; and (by way of a passage adjoining the minaret) another colonnaded courtyard, off which opens the tomb of Sidi Sahab (not open to the public).

4. Mosque of the Three Doors

One of the oldest buildings in Kairouan, the Mosque of the Three Doors (Mosquée des Trois Portes or Djemaa Tleta Bibane) was founded in 866 CE by an Andalusian scholar.

Its most notable feature is the facade with three doorways, from which it takes its name. There are two friezes of Kufic inscriptions, the lower of which dates to 1440. The minaret also dates from this year.

Non-Muslims cannot enter this mosque, but you're mostly here to see the famed front façade anyway.

To the north of the medina, beyond the Avenue de la République, are the Aghlabid Basins that supplied water for the Aghlabid palace, which once sat on the site of Kairouan's present-day cemetery.

The water was brought by aqueduct from Djebel Cherichera, 36 kilometers away. The smaller basin was a settling tank from which the water flowed to the larger one that had a capacity of 50,000 cubic meters.

In the center of the larger pool is the base of a pavilion, where the Aghlabid rulers used to relax. The pools were restored in 1969, and another pool has been discovered just to the west.

This ornate zaouia (shrine) is one of Kairouan's finest and best preserved examples of traditional Arabic ceramic tile decoration and artistry.

The sumptuously decorated inner courtyard is a highlight for photographers, completely covered in vibrant, colorful ceramic tiles displaying intricate and beautiful patterns. The tile work has been extremely well preserved, so you can really absorb the dazzlingly beautiful effect of the decoration.

While here, also note the detailing of the stucco ceilings and the fine wood used for the building's interior beams.

A short, 200-meter walk from the shrine is Bir Barouta, a 17th-century well that is another of the medina's major religious sites.

According to legend, an underground channel connects this well with the Zamzam spring in Mecca that, according to Islamic belief, sprang from the desert to quench the thirst of Ishmael (the Prophet Abraham's son). Due to the legend, pilgrim visitors to Kairouan come here to drink this holy water.

A camel makes slow rounds of the well in the room, drawing up the water from the depths by a pulley-system.

Despite the obvious important historic connections of this site, for many visitors, the treatment of the camel, trapped in such a small space and destined to trudge around the well for visitors' entertainment, is enough to avoid a visit.

The medina's souk quarter was built mainly in the 17th and 18th centuries and is still occupied by the traditional craftsmen of Kairouan.

It's an interesting place to visit, even if you're not a shopper, as you can see many of the craftsmen – including metal workers, wood workers, and potters – busy at work in their workshops.

To reach the souk district, head down Rue Ali Belhaouane. After passing the El Bey Mosque on your right and the El Maalek Mosque on your left, Bab el Tounes (Tunis Gate) comes into sight. The souk streets all ramble off from here.

Snug within the medina muddle, this dar (traditional medina house) is both guesthouse and museum, meaning its wonderfully preserved and restored interiors can be viewed even if you're not staying here.

Knock on the front door, and the welcoming family who live here and run the guesthouse will give you a tour (in either French or English) of the rooms, highlighting the original architectural and interior features, as well as the history of the house.

Features such as alcoved beds and seating areas set behind ornate carved frames, stained-glass detailing in doors, and colorful wall tiles allow visitors to get a sense of family life and domestic architecture within the medina over the centuries.

Tours usually end on the rooftop terrace, which has great views over the medina.

Although most day trippers to El Jem arrive from coastal resorts, such as Sousse or Monastir, Kairouan is also a good base from which to visit.

El Jem's Roman amphitheater is Tunisia's most famous historic attraction, built during the 2nd century, when Thysdrus (modern-day El Jem town) was thriving and prosperous thanks to being a major olive-growing center for the Roman Empire.

The amphitheater is the fourth biggest in the world, and with the preserved sections of the seating tiers rising to 40 meters, it's one of the most impressive Roman-era monuments still standing.

El Jem is 71 kilometers southwest of Kairouan, making a day trip from town an easy prospect, particularly if you have your own wheels or hire a driver for the return trip.

Originally this gate was known as Bab el Jalladin (Gate of the Leather dealers). It provides access into the medina. Stones recycled from Roman sites have been built into the inner side of the gateway.

In front of the gate is Place Muhammad el Bejaoui (Place des Martyrs).

A large cemetery with some interesting tombs dominates the east side of Kairouan's Great Mosque.

The Lalla Rihana Gate (named after a local holy woman) sits on the eastern side of the mosque, projecting from the mammoth mosque walls. It is a square structure in Hispano-Mauresque style, built in 1294.

Inside the cemetery itself are multiple rows of whitewashed tombs. For photographers, the cemetery is a good place to get interesting shots of the mosque complex with the rows of tombs in the foreground.

The Mosque of the Sabres (also known as the Zaouia Sidi Amor Abbada) was built in 1860 as the tomb of a local blacksmith, also revered as a holy man.

With its five ribbed domes, the zaouia is one of the principal shrines in the city and is regularly visited by pilgrims who come here to pay respect to the holy man and to pray.

Around the tomb are examples of the craftsman's skill: sabres, stirrups, anchors, and chests are all on display, together with wooden tablets inscribed with the holy man's prophesies.

In 671 CE Uqba ibn Nafi, commander of the Arab army, which was thrusting into North Africa, established his headquarters here in the middle of the steppe country.

The site was chosen on strategic grounds, for there were neither Roman nor any earlier settlements in this waterless area. Kairouan then became the base from which the victorious Islamic forces advanced westward through North Africa and into Spain.

Its great days were in the 9th century, when the Aghlabids made it their capital. But this heyday did not last long, for the leading role in North Africa passed to Mahdia after its foundation in 916 CE and to Cairo after its conquest by the Fatimids in 973 CE.

The final decline began with a raid by the Beni Hilal nomads, who sacked and destroyed Kairouan in 1057, though sparing the religious buildings.

Although Tunis was now the uncontested political capital of Tunisia, Kairouan retained its religious importance for the Muslims of North Africa. Seven pilgrimages to Kairouan are regarded as equivalent to the prescribed pilgrimage to Mecca. 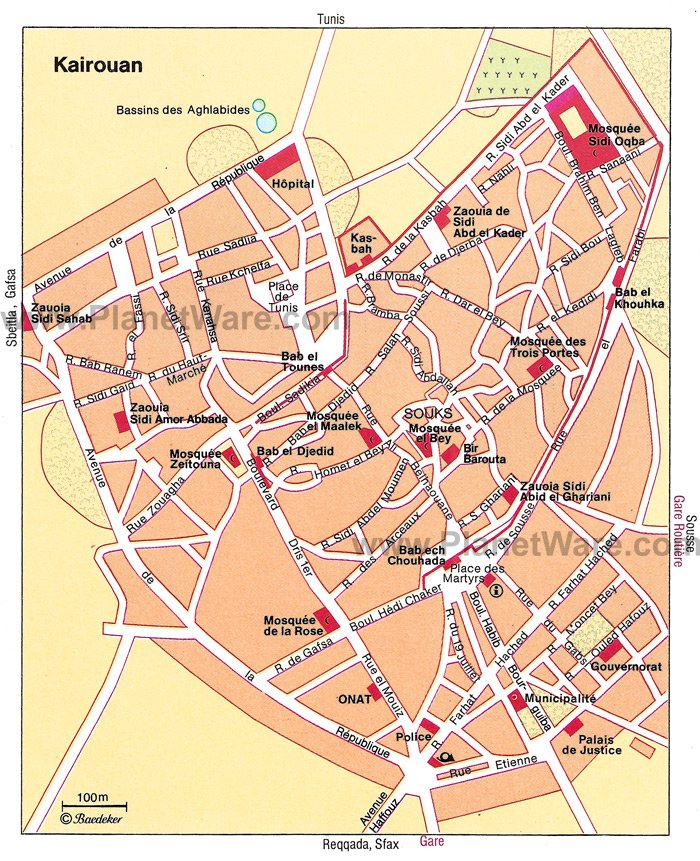