Casablanca is the main gateway to Morocco and most visitors' first taste of the country, as it is home to the primary international airport. This bustling city is Morocco's business powerhouse and industrial center, with a modern swagger that is unseen in other parts of the country. Needless to say, compared to the exotic charms of Marrakesh and Fes, it can't compete, and most visitors only pass through or stay one night.

Despite the fact that Casablanca's tourist attractions and sights may be few, you will find some gems if you delve a little deeper. The big sight is the massive Hassan II Mosque, and a tour of the building is worth an overnight stay in town. The medina is a charming and photogenic district full of old-fashioned ambience, and the city center is home to many beautiful Art Deco-style facades that architecture fans will adore.

Discover the best places to visit in the city with our list of the top attractions in Casablanca.

See also: Where to Stay in Casablanca: Best Areas & Hotels

On the shoreline, just beyond the northern tip of Casablanca's medina (old city), the Hassan II mosque dominates the entire city. Finished in 1993, it is the second largest mosque in the world, covering two hectares in size with the world's tallest minaret (200 meters high). The prayer hall can accommodate 25,000 worshippers, while the courtyard (which boasts a retractable roof) can fit another 80,000.

Astonishingly intricate decoration covers every centimeter of surface. The location, right on the tip of the rocky bay above the ocean, is thoroughly dramatic. Non-Muslims can visit the mosque on guided tours, which begin at the mosque's western entrance several times per day.

Although Casablanca's old city district may not have as much exotic atmosphere as the medinas of Fes and Marrakesh, the maze-like tumble of alleyways still hides much to discover. Authentic tradesmen sell their wares to shoppers, with the butcher, the baker, and the candlestick maker all accounted for. It's a rambling and ramshackle neighborhood with an authentic residential feel, and a great place to experience the pulse of Casablanca life.

There are also some interesting holy men koubbas (shrines) in the medina's southern section.

Place Mohamed V is the central plaza of Casablanca. It is home to many of the city's important official buildings, including the main post office, Palace of Justice, Prefecture, French consulate, and the main Bank of Morocco. The building facades all sport the neo-Moorish style that French Resident-General Lyautey planned out for the city as he set about modernizing Casablanca in the early 20th century. The square has a central fountain and well-tended gardens. During the evenings, it is a local favorite spot for promenading.

Casablanca's Corniche (beachfront district) in the Ain Diab suburb, is the city's vortex for those who want to see and be seen. Much of the shoreline is now home to luxury hotels and restaurants. During the day, the many beach clubs here do a roaring trade, with sun worshipers lapping up the rays and splashing in the club swimming pools. Farther along the shoreline is the public beach.

On sunny weekends, this is a great spot for people watching, with plenty of local families heading to the sand for picnicking and promenading.

This graceful cathedral was built in the 1930s, and its architecture is a harmonious blend of both European and Moroccan style. Unfortunately, it has been left to wither in the past few decades, and is now in need of serious restoration. But even in its current dilapidated state, the structure is still beautiful. If you're lucky, the guardian will allow you inside where you can capture a sense of this building's past glory.

Nearby is the Notre Dame de Lourdes, a church lit by a vast stained-glass window covering more than 800 square meters.

Casablanca's bustling central market is a must for tourists who want to throw themselves into the midst of city life. Right in the city center, the market is where locals come to buy and sell-be it housewives bartering for vegetables, or grocers yelling out their special deals. It's a great opportunity for photographers and fun for everyone else.

You'll find everything here, from plastic bowls to Morocco's famous slippers. You never know, you might be able to snag a few bargains for yourself during the visit.

This sleepy seaside city, about 28 kilometers north of Casablanca, offers some fine beaches and is a relaxing alternative to staying in Casablanca. Although home to Morocco's second largest port, Mohammedia and its tranquil charms haven't been affected by the industry. The little medina is a delight to wander through, while the New Town area is attractively laid out, with grand, palm-tree-lined boulevards.

On the coast, it's all about the beach. Cafes and restaurants here bustle with activity on summer weekends, when half of Casablanca seems to escape to Mohammedia's sand.

About 237 kilometers south of Casablanca, Safi has been an important port since Roman times, but it was the Almohade rulers who surrounded the city with grand ramparts and made it an intellectual and spiritual center. The Portuguese occupied the city in 1508 and added to the architecture by building the stately Dar el Bahar Fortress on the shoreline-now the town's most recognizable monument.

Safi is Morocco's most famous ceramic center, and once you've visited the fortress, Safi's medina is a great place to spend an afternoon. Pottery Souk and the National Ceramic Museum are the old town's star attractions.

This charming seaside village, about 182 kilometers south of Casablanca, has a chilled-out vibe that's perfect if you're worn out after visiting Morocco's imperial cities. The lovely beach and the Saadian-era Kasbah (fortress district) are reason enough for a trip here, but for many others, Oualidia is all about the seafood. Local restaurant menus list plenty of seafood pulled fresh from the sea that day, making the town a highlight for any traveling foodie.

When tourist boards started promoting Morocco's Atlantic coastline, they somehow left little Azemmour off the list. But this village, 88 kilometers south of Casablanca, has a history stretching back to Punic times, and a wonderful handful of sites showcase that long tenure. The adobe ramparts encircling the medina area are an obvious attraction and they connect to the Kasbah (fortress), which dates from the 16th century.

The beach is also one of the best along the Atlantic coast, and is a well-kept secret. Indeed, half of Azemmour's charm lies in the fact that nobody else seems to stop off here.

For a small town, El Jadida is packed full of interesting things to do and is surrounded by beautiful strips of sand, perfect to flop onto when you've dosed up on history. In the Citadel area, built by the Portuguese, you can scramble up onto the walls for excellent sea views and then visit the old prison, which also once functioned as the town's synagogue.

Also in the citadel area, check out the atmospheric cisterns, which date from the 16th century and were used as a filming location in the famous Orson Welles' movie Othello. El Jadida lies about 102 kilometers south of Casablanca.

The origins of Casablanca can be traced to the medieval town of Anfa, which is now one of the city's suburbs. Anfa became the capital of a Berber principality in the aftermath of the Arab invasions of the 7th and 8th centuries. The Berbers embraced Islam but quickly succumbed to heretical doctrines, setting up their own prophet and a Qur'an in Berber language.

The principality was known as Berghouata, and its tribal inhabitants joined a Kharijite rebellion against the Arab governor of Tangier. In the 11th century, the Almoravids waged holy war against these heretics, who were finally defeated by the Almohad Sultan Abdul Mou'min.

The town came under the influence of the Merenids during the 13th century, but eventually became independent as the dynasty weakened. The Portuguese destroyed the town in 1468 in reprisal for piracy. Portugal sent a fleet of 50 vessels and 10,000 soldiers to occupy the town, which was sacked and then abandoned. But piracy soon revived, and the Portuguese returned in 1515 and destroyed the town once again.

In 1575, the town was rebuilt, fortified, and renamed Casa Branca by the Portuguese in an attempt to establish control over the area. However, the Portuguese rulers fell under constant attack by surrounding Muslim tribes and were finally forced to abandon the town following a terrible earthquake in 1755.

Under the reign of Sidi Mohamed ben Abdallah (1757-1790), the town was rebuilt with a mosque, madrasa, hammam, and a fort and renamed Dar El Beida (The White House), which the Spanish eventually translated as Casablanca.

Where to Stay in Casablanca for Sightseeing

To soak up Casablanca's modern vibe and historic sights, the best place to stay is in the city center, near the old medina, which lies about a five-minute taxi ride from the Hassan II Mosque. Another popular place to stay is on the oceanfront, especially in the upscale Anfa neighborhood, near the Corniche. From here, it's less than 10 minutes by taxi to the city center. 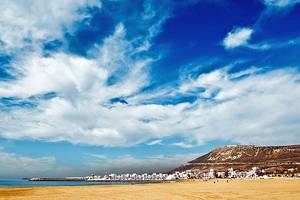 Atlantic Coast Destinations: For sun-drenched holiday relaxation check out the resort town of Agadir, to the south of Casablanca. Or head north to the capital, Rabat, with its museums and small medina area. From Rabat, hop farther up the coast to Tangier, a major port city, famous for its 1950s artistic heyday. 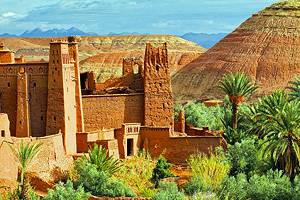 Heading Inland: From Casablanca, take the train inland to the red city of Marrakesh, Morocco's premier tourism destination, famed for its walled medina and the Djemaa el-Fna. Marrakesh is the perfect place to get in some city action before heading out into the Atlas Mountain region, with its gorges, desert, and mudbrick kasbahs. 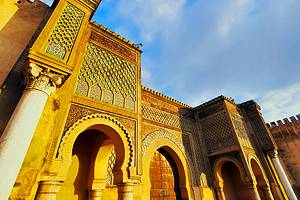 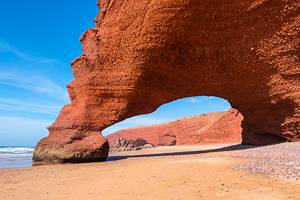 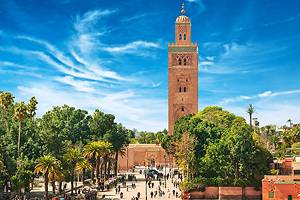 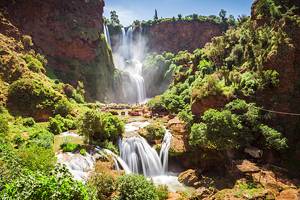 12 Top-Rated Attractions & Things to Do in Gibraltar
Recent Articles 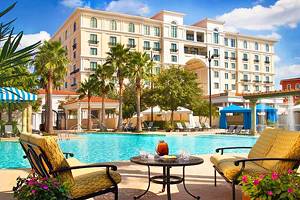