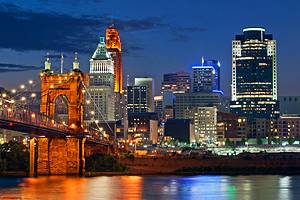 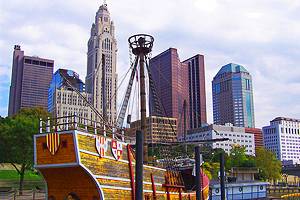 Photographers enjoy Ohio because it has waterfront scenery to the north, rolling hills and waterfalls to the south, and farmland in between. Northern Ohio is bordered by Lake Erie, small cottage towns, and it is a well-known bird migration path. The serene landscape of Amish country offers an array of images, from clothes drying on the line to cars sharing the road with horses and buggies.

Southern Ohio is industrial and bookended by the mighty Ohio River, where vintage sternwheelers congregate every year to celebrate the Buckeye State's contributions to the maritime industry. Enjoy picturesque small towns throughout Ohio.

The Hocking Hills region in southern Ohio is one of the most picturesque areas in the state. From waterfalls to towering limestone cliffs and caves, there are so many photo opportunities along the trails at Old Man's Cave. The other scenic areas of the state park are Ash Cave, Cantwell Cliffs, and the state nature preserve at Conkles Hollow.

Beautiful pictures can be found in rolling hills of Ohio's Amish country in Holmes County. The simple way of life of those who live here is tranquil. The back roads in Amish country have scenes of horses and buggies sharing the roadways with cars, and overalls drying on the clotheslines. The beauty of photographing in Amish country is that no agenda is needed. Just drive in one direction, and opportunities present themselves.

The Magee Marsh in northwest Ohio is one of the top birding destinations in the United States. The wildlife area sits on the shores of Lake Erie and is a stopping point for migrating birds in the spring. Warblers and other birds, like the scarlet tanager, can be seen in the marsh along with other wildlife like bald eagles.

The skyline of Columbus is nice to capture, with the Scioto Mile bike and walking path and the downtown riverfront in view. Head to the 40th floor of the Rhodes Tower for an aerial view of the downtown area or stake out a spot at North Bank Park at dusk, when the lights on the LeVeque tower are illuminated.

If you are spending a few days here, plan out your itinerary to make the most of your time. Consider hitting some of the nearby hiking trails to capture some nature shots. Alternatively, head to some of the museums in Columbus for a little history and culture.

Ohio has more than 100 historic covered bridges that make for colorful images, and many of them are still in use. Drive along the Covered Bridges Byway in Ashtabula County in northern Ohio to see more than 19 of them located throughout the scenic countryside.

The Serpent Mound in southwest Ohio is an effigy mound created by the Adena Indians thousands of years ago. This 1,300-foot-long prehistoric mound is designed in the shape of a serpent and is not only historic but the largest of its kind in the world.

Ohio's scenic countryside is colorful and peaceful, with the red barns of the dairy farms against the landscape of green fields and the rising morning mist. Dusk brings to life farmers finishing up the day's harvest as the sun sets with golden hues on Ohio's agricultural life.

The historic Roebling Suspension Bridge in Cincinnati is as stunning in the daytime as it is illuminated at night. The 1,057-foot bridge helps pedestrians and cars cross the Ohio River into Kentucky, and it was the longest suspension bridge in the world when it opened in 1866 before the famous Brooklyn Bridge was built.

Accommodation: Where to Stay in Cincinnati

The Marblehead Lighthouse on the northern Ohio shores of Lake Erie is one of the most iconic structures to photograph in the state. This spot on the Marblehead Peninsula usually has a backdrop of choppy waters crashing along the rocky shoreline behind the lighthouse.

The Ohio Caverns in Delaware are the state's largest caverns, featuring miles of stalagmites, stalactites, and other crystal formations below ground. The caverns are open year-round since they remain a consistent 54 degrees Fahrenheit, even at depths of 103 feet below the surface.

The Ohio River marks the southern border of the state, and there is always something to photograph, from bridges and paddleboats to the Cincinnati and Covington, Kentucky skylines. Spanning 451 miles across Ohio's southern border, the Ohio River has colorful imagery, especially during the morning light and at dusk.

The collection of Chinese and Japanese gardens in the Schnormeier Gardens in Gambier, Central Ohio, has 10 lakes, waterfalls, streams, and wooded landscapes. The fifty acres of gardens have sculptures, benches, and bridges accenting the gardens.

The Lakeview Cemetery in Cleveland is a garden cemetery with mausoleums, lakes, elaborate headstones, and memorials. One of the most famous and photographed monuments is the bronze Crying Angel statue, which has an ominous appearance.

The charming Clifton Mill in Clifton just outside of Yellow Springs is a working, water-powered grist mill that is a preserved piece of history on the Little Miami River. During the holidays, the Clifton Mill is decorated with thousands of lights and vintage holiday displays.

No one expects to see a castle in agricultural Ohio, which is why the Loveland Castle near Cincinnati is a nice place to capture some photographs. The small castle is tucked away in the woods. The castle was built in the 1920s to honor the Knights of the Golden Trail and the knighthood that they represented. Today, the castle and grounds are open for tours.

The Bicentennial Barns are located throughout Ohio and were commissioned in 2003 to commemorate Ohio's bicentennial. One barn in each of Ohio's 88 counties was selected and artistically painted with the bicentennial logo. These barns proudly represent Ohio's heritage.

The historic canal locks in Side Cut Metropark near Toledo are a beautiful sight when the water is flowing through them. Several locks in the park are preserved pieces from the Erie Canal, which flows through the area and was once an important part of moving goods between Ohio and Pennsylvania in the 1800s.

18. The Guardians of Cleveland

The Guardian statues of Cleveland are as impressive as they are mysterious to most people who pass them in the northern Ohio city. The Art Deco statues stand guard over the east-west traffic on the Hope Memorial Bridge where they've represented the advancements in transportation since 1932. Each statue holds a different representation of transportation.

Ohio's roots are based on the agriculture that is produced in the state. The corn, soybean, and wheat fields throughout rural Ohio communities add an extra ambience and beauty to the countryside. Fall is an especially stunning time to capture the crops before harvest.

The spring wildflowers on the floors of Ohio's forests are delicate natural treasures. There's a small window of time to see them each year before the leaves on the trees block them from the sunlight. April and May are the best months to look for the large white trillium, Virginia bluebells, wood poppies, Jacob's ladder, and dozens of other species.

One of the most stunning gardens in Ohio is the Topiary Garden Park in Columbus. There are 80 life-size topiaries designed to recreate the post-Impressionist painting by Georges Seurat, A Sunday Afternoon on the Island of LaGrande Jatte. Step into the masterpiece and enjoy a picnic among the topiaries.

Berea Falls in Berea near Cleveland is a picturesque urban waterfall representing the glacial history of the area. Years of water seeping from the Rocky River through the Berea sandstone eventually formed the series of scenic waterfalls that people enjoy today.