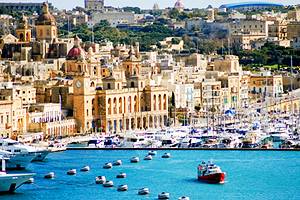 Malta's clear azure waters and white sands are just one of many reasons to visit this small European island. A warm welcoming culture with a history that dates back thousands of years, Malta has lots of archeological sites, beautiful architecture, and plenty of outdoor destinations to discover and enjoy.

Whether you're visiting for the adventure or the sights, there are plenty of stunning destinations in this tiny country waiting to be photographed.

A somewhat small bay with striking deep-azure waters, the Blue Lagoon is surrounded by soft white sands that look like they're out of a postcard. Rich marine life makes this a great place for snorkeling and swimming. The waters are so calm that you can swim across to the uninhabited Cominotto island, 100 meters away.

Accommodation: Where to Stay in Malta: Best Areas & Hotels

Despite its singular name, the Blue Grotto is actually a group of sea caverns across from the uninhabited islet of Filfla, a bird sanctuary. At certain times of the day, the inside of the caves looks a soft shade of blue – the result of the sun bouncing off the sea in a mirror-like effect.

A UNESCO World Heritage Site, the Neolithic megalith temple complex of Ggantija is older than the pyramids of Egypt. Originally part of a sacred site dedicated to fertility rites, the stunning structures were built before the wheel and metal tools had made their way to Malta.

The highest point in Malta is on the Dingli Cliffs, offering wide-open views over the blue sea and the terraced fields below. Getting to the top requires a steep – but well worth it – climb, especially as the sun sets over the water. Once here, spend some time visiting the tiny chapel perched on the cliff's edge and listening to the waves crash against the rocks.

A checkerboard of salt pans lines up the coastline on the island of Gozo. Part of a 350-year-old tradition to harvest salt crystals, this three-kilometer stretch of coastline is a stunning sight from the hill above. The Romans were the first ones to harvest salt in the area using the exact same techniques you see today.

Ghajn Tuffieha Bay and its red beach can only be accessed by walking down 200 steps on a stone staircase. Quieter and more secluded than neighboring Golden Bay, Ghajn Tuffieha is surrounded by rocky slopes and is a perfect spot to watch the Maltese sunset.

Located in the tiny island of Gozo, golden-reddish Ramla Bay is surrounded by green hills and sand dunes. There's little development in the area, and the bay remains unspoiled and rich in natural beauty. According to legend, Ulysses and the nymph Calypso spent seven years together in one of the caves here.

An almost-square natural limestone arch located at the end of the Wied il-Mielah Valley, this is one of the most popular photo locations in Gozo. Sturdy enough to be walked on, the arch is at the end of a long, dusty road with some stunning views over the sea.

Gozo Island's citadel dates back to the 15th century, though many reconstructions and additions over the years have given it the look it has today. Bastions, fortified walls, and chapels were added over older ruins as well. Although the citadel received heavy fire during the French invasion in the late 1800s, it remains almost intact to this day.

Technically a lagoon of seawater rather than an actual sea, this massive sinkhole and the stony beach nearby are popular tourist attractions. This area is perhaps best known for its "Inland Sea Tunnel," a sort of very narrow passage arch that connects the sinkhole to the open sea. Jacques Cousteau considered this area one of his favorite diving sites.

Although the actual cave is off limits to visitors (and guarded by a tall, rusty metal fence), the Ghar Hasan cave is a local legend and an adventurer's dream. The entrance of the cave can be accessed by walking down some treacherous rocky steps down the cliff. From here, you'll get stunning open views over the coastline and the azure waters into the distance.

As Malta's largest sandy beach, Ghadira Bay is also very popular with tourists. Though only 800 meters long, it offers soft white sands and the bluest waters you'll find in Malta. The area is also popular for water sports, including sea kayaking and windsurfing opportunities.

The public gardens on the edge over the Grand Harbour are part of the 15th-century St. Peter & Paul Bastion. Once used exclusively by knights, the terraced gardens are the highest point of the old city walls. From here, it's possible to see the three fortified cities of Malta, as well as the docks and parts of the city below.

Mnajdra is a megalithic temple complex built around the fourth millennium BCE and one of the oldest religious sites on Earth. Built of coralline limestone, the temple was partly used as an astronomical observatory and partly as a temple where both religious and fertility rites were conducted.

This traditional fishing village in the south of Malta was once a popular trading port used by the Phoenicians and Carthaginians. Today, it's a popular destination for its charming harbor, as well as the many colorful luzzi (traditional fishing boats) lining up the coastline. Great restaurants and swimming spots add to the attraction.

A natural swimming pool with stunning green and azure blue waters, St. Peter's Pool is also a great destination for snorkeling. For brave souls, it's possible to climb higher and then dive into the inviting crystalline waters below. Not far from Marsaxlokk but still remote and hard to access, this is a spot that deserves a full day to truly be enjoyed.

Malta's "Silent City" is over 4,000 years old. Apostle St. Paul is said to have walked its streets once, and ancient palaces and cultural and religious monuments line up its quaint narrow streets. Admiring the architecture should be at the top of your list when visiting, but Mdina also has gardens, catacombs, and much more to offer.

Built in the 1500s, this co-cathedral may look plain outside, but its interiors are considered one of the most stunning examples of high Baroque architecture in the entire continent. Painted vaulted ceilings, stunning frescoes, carved stone walls, and golden arches make for an impressive sight. Over 400 knights have their final resting place under the marble floors.

In 1979, Disney and Paramount Pictures built a massive film set in Malta for the filming of Popeye. It included nineteen colorful wooden buildings designed to look like a traditional fishing village. After the filming wrapped, the village was converted into an open-air museum and today includes rides, museums, live shows, and a cinema. The village is particularly enchanting when viewed from Anchor Bay.