Specifically created so the federal government would not be in any one state but instead on land straddling the Potomac River, which belonged to Maryland and Virginia, Washington, D.C. is one of the most beautiful cities in the U.S.

The nation's capital is filled with museums, monuments, and national symbols, like the White House and US Capitol, all of which are free and open to the public in some form. Washington's attractions are the best places for photography in the city. For inspiration, here are photos of some of Washington D.C.'s most famous and beautiful places to photograph.

The Jefferson Memorial sits adjacent to the Tidal Basin and is an impressive sight year-round. But during the brief period in spring when the cherry blossoms bloom it is particularly fetching. Visit for sunrise to catch a reflection of the almost pink filtered lighting captured by this photo.

Day or night, the US Capitol building is one of Washington, D.C.'s most monumental sights. The marble edifice is a symbol of American Democracy, and the giant dome is based on St. Peter's in Rome. Make sure to step inside and see the rotunda under the dome. The walls are painted with famous scenes from American history.

Every U.S president except George Washington has resided at 1600 Pennsylvania Ave, otherwise known as The White House. To see the inside, you'll need to arrange a tour through your Congressional office or embassy months in advance, but everyone can see this iconic white manse and snap a picture from behind the fence outside.

Standing 555 feet high and anchoring one end of the National Mall, the Washington Monument is especially beautiful at sunset or sunrise (there are fewer crowds as well). The base of the monument is ringed by 50 American flags (one for each state).

Everyone loves the Lincoln Memorial, one of Washington DC's most treasured attractions. The statue of President Abraham Lincoln pictured here stands 19-feet-high and is surrounded by 36 columns. Each column represents a state that existed when Lincoln died.

One of the most iconic photos in DC is a snap like the one pictured here of the Washington Monument mirrored in the Reflecting Pool. The best place to capture this photo is from the Lincoln Memorial's steps at the Reflecting Pool's opposite end. Head out at sunrise to take this snap–you'll get beautiful colors and no crowds.

Some of DC's most important sites are also somber memorials. In this photo, a veteran looks for a name at the Vietnam Veterans Memorial at dawn. The memorial is a long wall inscribed with the names of all American soldiers who lost their lives or went missing during the Vietnam War. This is one of DC's most visited memorials, and it's on the National Mall.

One of the newer memorials constructed on the National Mall in 2004, the WWII Memorial honors the 16 million servicemen and women who fought in WWII, including the 400,000 who died. It also honors all the civilians who supported the war effort from home. The Memorial is on 17th Street between Constitution and Independence Avenues.

The National Gallery of Art houses a diverse collection of American and European masterpieces. While in the museum make sure to check out the underground moving walkway between the East and West buildings (pictured above). The light show is a hit with kids and adults alike.

One of the largest cathedrals in the world, it took 83 years to construct the Washington National Cathedral. The English-style, Neo Gothic building was built between 1907 and 1990. Inside, you will find beautiful stained-glass windows and hand-embroidered kneelers among details.

Escape the city with a visit to the Chesapeake & Ohio Canal National Historic Park and its tow path running parallel to the Potomac River. The canal begins in Georgetown and runs for 184 miles north to Cumberland, Maryland. The towpath is a wonderful spot to go for a run, walk, or bike ride.

Anchored by Key Bridge and Georgetown University (both are visible in this photo), the historic neighborhood of Georgetown sits right on the Potomac River and is filled with charming row houses dating back to the early 1700s. The neighborhood is known for its boutique shopping and excellent dining.

Another key Washington, D.C. neighborhood, Dupont Circle is centered by the traffic circle of the same name. On the streets branching off from the circle, you'll find a host of shops, restaurants, embassies, and hotels, as well as plenty of residential row houses like the ones pictured above. These colorful, architecturally intriguing buildings are classic DC.

Right on the National Mall, the distinct red sandstone Smithsonian Castle is home to the Smithsonian Institution's administrative offices and visitors' center. The building is the circa 1855 work of architect James Renwick Jr., who also designed St. Patrick's Cathedral in New York City. The castle is a National Historic Landmark.

The interior architecture at Union Station, which is also a working train station in the heart of DC, is stunning. The national headquarters for Amtrak, the Beaux Arts building dates back to 1907 and has been meticulously restored over the years. The massive arched ceiling of the great entrance hall is spectacular. Make sure to look up. 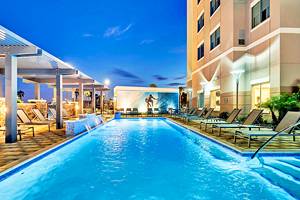