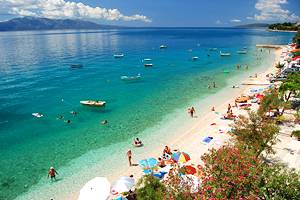 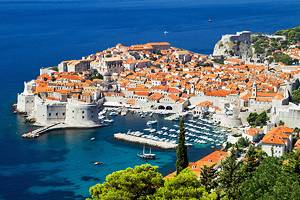 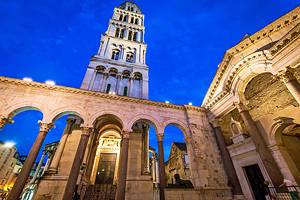 Croatia is a photogenically blessed country, with a gorgeous mix of beautiful beaches, islands, and Adriatic seascapes, as well as lots of ancient history in the form of its medieval walled cities like Dubrovnik and Split. It is also home to the last remaining Roman amphitheater in the world with a full circular wall, in the ancient town of Pula.

Wherever you wander in Croatia, be it on or off the beaten path, these are the most beautiful places to visit in this gorgeous country.

1. Dubrovnik from the Sky

This aerial panoramic view of Croatia's most famous medieval city, Dubrovnik, shows how impressive the historic walled city is. It also captures the stunning natural landscape surrounding it. Dubrovnik sits on the Dalmatian Coast, and the Adriatic Sea here is crystal clear and azure. If the old town looks familiar and you lived for Game of Thrones, it served as a set for King's Landing.

Hvar Island is one of the most trendy and charming of the islands just off the Dalmatian coast. Ruled by the Venetians between 1420 and 1797, it has an Italian feel to its car-free Old Town, with a large central square backed by a 16th-century cathedral. Popular with yachters and celebs, Hvar also boasts some of Croatia's top five-star beach resorts. Get here via the ferry from Split.

Zagreb is Croatia's capital and largest city. It's a vibrant spot to explore for a few days. Head to the medieval Gornji Grad (Upper Town) for attractions like a Neo-Gothic cathedral with twin steeples. Also pay a visit to the 13th-century Tower of Lotršcak, which you can climb for fantastic views across the rooftops. The quirky Museum of Broken Relationships is another Zagreb must!

Accommodation: Where to Stay in Zagreb: Best Areas & Hotels

Another Dalmatian island beauty is Vis. Here, you'll find a number of scenic beaches, including this sand and pebble beach in the Komiza village waterfront. The town has been a hub for fishermen since the 12th century and is filled with old stone houses on narrow backstreets. While here, organize a boat trip to the famous Blue Cave on nearby Bisevo island.

Dubrovnik's medieval defensive walls still stand and have been declared a UNESCO World Heritage Site. Book a sightseeing tour that includes walking the two-kilometer wall circuit. Along the way, you'll learn about the towers, cannons, and fortresses you pass. The views from atop the ramparts are also stunning.

This waterfall is part of the network of 16 lakes and waterfalls that make up stunning Plitvice Lakes National Park in Croatia's central region. Swimming under it when the pink flowers are in bloom is an ethereal experience (that is also perfect for Instagram). The park is usually visited on bus sightseeing tours from Zagreb or Zadar.

Talk about a view! Looking through this stone window yields an aerial view of Old Town Split. Croatia's second largest city, Split also served as a set location for Game of Thrones. The city doubled for Kings Landing in the show, and a number of scenes were filmed at its 1,700-plus-year-old Diocletian's Palace.

You can't help but feel the love in Galesnjak in the Zadar archipelago. As this photo proves, it is indeed shaped like a heart. Onshore, you'll find a completely uninhabited landscape of shrubs and some pebble beaches. You can't stay on Galesnjak, but you can get engaged here. Known as "Lovers Island" it is a popular proposal spot with locals. You can access it via boat from Zadar.

The gorgeous spoon-shaped Milna Bay, on the west coast of beautiful Brac Island, is backed by the fishing village of Milna. Take a stroll along one of the coastal footpaths to see the old fisherman's houses and surrounding farms growing grapes and olives. Brac is part of the Dalmatian Island chain and can be reached via regular catamaran service from Split.

Take an early morning stroll along beautiful Baska Beach before the crowds arrive. On Krk Island, Baska is another favorite summer escape for Croatians and tourists. The Adriatic Sea here is clear and turquoise and great for swimming. Krk Island is part of the Kvarner Bay archipelago.

It's an impressive view from the Trogir City Gate in the city's historic Venetian structured Old Town—it is also a UNESCO World Heritage Site. Trogir sits on a small island that is linked by bridges to both the mainland (it is less than 30 miles from Split) and the bigger Ciovo Island. Head to the seaside promenade come dark on summer nights for dinner at a breezy outdoor café or restaurant.

Accommodation: Where to Stay in Trogir

St. Anastasia Cathedral in Zadar looks especially magical at sunset. Zadar is Croatia's oldest inhabited city and arguably its coolest. Like Dubrovnik, it is a historic port on the gorgeous Dalmatian Coast, but it has far fewer crowds, making it an ideal summer getaway.

So much of Croatia looks like it belongs in a Disney movie, but Vrbnik town on Krk Island in the Kvarner Bay archipelago is a contender for first place. Especially when the sun is setting, like in this photo, and the views become that much more breathtaking.

Constructed by Roman Emperor Diocletian as his retirement home in AD 305, Diocletian's Palace overlooks the Adriatic Sea and is also a UNESCO World Heritage Site. The palace features four gates. Three faced the land, but the fourth originally opened right onto the water.

Accommodation: Where to Stay in Split: Best Areas & Hotels

Pula is home to some really well-preserved Roman ruins, including the Pula Arena. It is the only remaining Roman amphitheater in the world with a complete circle wall and was built between 27 BC and AD 68, which is pretty mind-blowing to think about.