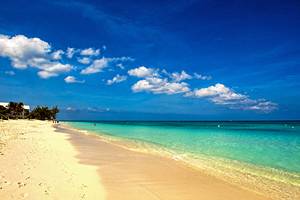 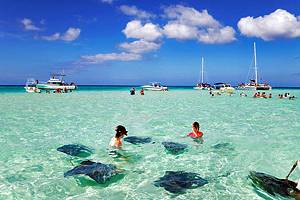 The ocean at sunrise and sunset is the popular scene to photograph on the Cayman Islands, but these islands are committed to conservation, so there is beauty to capture both above and below the water's surface.

If you are heading to the Cayman Islands, it is best to invest in a small underwater camera to make sure you can capture some of the incredible underwater scenes, from the caves and coral to the stingrays and tropical fish that are easy to see in the clear Caribbean waters.

Seven Mile Beach on Grand Cayman island is easily one of the most photographed beaches in the world for its pure white sands and idyllic ocean vacation scenery. The clear water and calm waves at Seven Mile Beach attract swimmers, snorkelers, and beachcombers.

The colorful and colonial architecture of George Town on Grand Cayman is fun to photograph. The small duty free shops and waterfront restaurants along the harbor showcase a day in the life in the village, which is a contrast to the natural scenery on the other side of the island.

The Cayman Crystal Caves provide a glimpse into life on the islands millions of years ago. Water erosion and environmental changes to the natural landscape on the islands resulted in spectacular crystal formations. There are three caves to visit, each with delicate stalactite and stalagmite formations created one drop at a time.

In addition to the coral reefs around the islands, the shipwrecks are especially interesting to photograph. The Kittewake shipwreck is one of the most popular because it covers a large area and attracts so many tropical fish. The Kittewake is an artificial reef for scuba divers to enjoy, and the clear water makes it nice to spend time exploring all sides of the ship.

Grab an underwater camera for the scene at Stingray City near Grand Cayman Island. A charter boat can take you to sandbars and shallow water just off the island, where you swim among dozens of large stingrays. It is a touristy spot, so the stingrays are acclimated to human interaction. It is a great place to get photos of stingrays, especially ones of these sizes and numbers.

Some of the lushest trees and gardens are in the Queen Elizabeth II Botanic Park on Grand Cayman. The 2.5-acre Floral Garden has several hundred species of flowers and tropical plants. The grounds also have beautiful bridges, waterfalls, and native iguanas to photograph.

Whether you explore the subterranean environment around the Cayman Islands by snorkeling or diving, you are almost guaranteed stunning photographs. There are many protected coral reefs around the islands to explore with an underwater camera. Some reefs have holes and cave-like structures that serve as protection for sea life, like silversides that hide in the shadows.

Grand Harbour is the heart of tourist activity on Grand Cayman island. This is where excursion and fishing boats depart and where cruise ships arrive with passengers exploring for the day. The beautiful Grand Harbour is bordered by tropical trees that are lovely against the nearly perfect cloud-scattered sky.

One of the most interesting spots to photograph on Cayman Brac is the Tibbetts wreck, which is a popular place for scuba divers. The shipwreck is an artificial reef that ranges in depth from 9 to 30 meters, with colorful coral formations and fish like groupers.

The jagged rocks that surround Smith Cove on Grand Cayman island are part of the appeal of this popular small beach area. The small cove is great to photograph when the tide is coming in and splashing against the natural shoreline.

The ancient Mastic Trail on Grand Cayman is surrounded by large mangrove trees, native swamps, small lizards, and large green fruits on the trees. This is a protected area where you can see some of the oldest plant life on the island as you stroll along a 200-year-old path through the nature reserve.

Little Cayman is known for pristine beaches like its sister islands, but the candy-colored beach homes add to the imagery of the tropical paradise. The multi-level homes throughout the island accent the blue Caribbean seas and blowing palm trees with colors of mint, pink, yellow, seafoam, and lavender.

The Cayman Island beaches are often busy with tourists, but Barker's National Park Beach is a bit more secluded and just as stunning as the others on the islands. This beach is ideal for scenic shots with little or no people in them, so it is easy to get colorful chairs against the tropical ocean backdrop.

The Cayman Islands' most famous, beautiful, and rare native species is the blue iguana. You are likely to see them roaming on the islands, but to ensure a nice photograph of them, you will want to visit and tour the Blue Iguana Recovery Programme, located at the Queen Elizabeth II Botanic Park. The facility has an extensive breeding program to protect and increase the blue iguana population.

You would not expect to find a place called Hell, let alone a naturally beautiful location with that name in such a picturesque tropical place like the Cayman Islands. The name only represents an interpretation of what the natives called the upward protruding natural limestone formations on Grand Cayman.

The jagged and spiked formations are monochromatic black and appear like lava rock, but they are actually algae covered limestone. Nonetheless, the landscape makes for interesting photographs that contrast with the rest of the island's colorful landscape.

There is an important conservation effort in the Cayman Islands for the protection of sea turtles. The three species found in the Caribbean waters around the islands are the endangered green sea turtle, hawksbill sea turtle, and the loggerhead sea turtle. The Cayman Turtle Centre on Grand Cayman has a turtle release program to aid in the preservation of the sea turtle populations.

Cycling is a popular way of getting around the Cayman Islands. Given the flat topography of the islands, getting around on two wheels is easy, and the images of resting bikes against the tropical vegetation make for nice photographs. Keep an eye out for casual and competitive bicyclists, or rent your own and explore the islands.

The Cayman Islands are home to more than 60 species of butterflies. Capturing photos of these colorful insects getting nectar from local tropical flowers makes for frame-worthy photos. One of the best ways to see many species that call the islands home is by visiting gardens, like the Queen Elizabeth II Botanic Park on Grand Cayman. 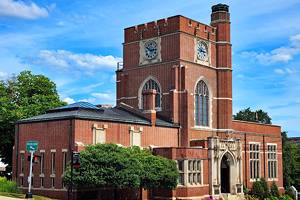 15 Best Things to Do in Nashua, NH